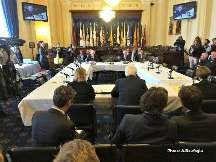 A leading U.S. Congressman on Tuesday urged the OSCE leadership, as well as the U.S. government, to raise the issues of political prisoners and lack of media freedom in Azerbaijan during their discussions with the Azeri government, and with president Ilham Aliyev personally.

"I met with [President Aliyev] twice in Baku, and I'm hoping to meet him here," Congressman Christopher Smith (R-N.J.), the chairman of the Committee for Security and Cooperation in Europe, (or Helsinki Commission) and the sponsor of 'Azerbaijan Democracy Act,' told TURAN's Washington correspondent.

Speaking about the prospects for 'Azerbaijan Democracy Act,' the Congressman said, the next step is 'probably another hearing, very shortly, followed by marked up of the legislation.'  'We are very serious about this bill,'  he said, 'We are trying to get President Aliyev to realize that he and his government have chosen to repress individuals, journalists, opposition folks, which does not end well.'

The U.S., he said, wants to be close friends with Azerbaijan, and with its government. But friends 'don't let friends commit human rights abuses.'

'It jumps off the page when you have approximately a hundred political prisoners now, and this number seems to keep growing,' the Congressman said.

Journalists, he added, 'sometimes write things that none of us like. But there gotta be truth tellers and if they tell the truth and then it's out of source with the regime, you don't incarcerate them.'  'When you find out whether you have a systemic problem, if there is corruption involved,  you get rid of the corruption, not journalists.'

The 'Azerbaijan Democracy Act' was introduced to the Helsinki Commission later last year, during a hearing on journalist Khadija Ismayilova’s imprisonment. It aimed at denying U.S. visas to senior Azerbaijani officials due to their ongoing crackdown against independent voices.

When asked if he ever heard back from the Azerbaijani government about the bill, the Congressmen said, 'not much!'

In the meantime, he added, there was 'all out effort to pour gasoline all over the resolution as if, it was inspired by the Armenians.'  'The Armenians didn't even know about it until after it was introduced. This was something my staff and I came up with trying to promote fundamental human rights in Azerbaijan.'

Congressman Smith on Tuesday also made a specific appeal on behalf of Khadija Ismayil and other prisoners, during the Helsinki Commission hearing with Frank-Walter Steinmeier on Germany's Chairmanship of the OSCE.

He urged the OSCE leadership to advocate for Khadija and others prisoners' release.  "If you make a visit to Azerbaijan, please request to meet with Khadija personally.

In his response Frank-Walter Steinmeier, Germany’s foreign affairs minister, said he recently met with President Aliyev during Munich Security Conference and announced his upcoming visit to Azerbaijan. "We'll urge Azerbaijan to respect the freedom of media and hopefully we'll find solutions on this issue one way or another," he said.