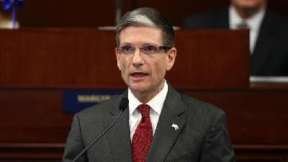 The bill now has two co-sponsors

The 14-page long legistlation was referred to three Congresisonal Committees and it’s "yet to be announced when [the bill] will come to the floor for a full vote,’ a congressional source told TURAN.

If passed into law, the bill’s operative section denies U.S. visas for senior leadership of the Azerbaijani government and their immediate family members; those who derive significant  financial benefit from business dealings with senior leadership or their family; and members of  the security or judicial branches.

An exception is made for travel to the U.S. by officials for participation in the OSCE Minsk Group meetings related to settlement of the Nagorno-Karabakh conflict between Azerbaijan and  neighboring Armenia.

The Sense of Congress addresses a prohibition on loans, insurance or financing through U.S.-funded programs; discourages multilateral finance assistance for Azerbaijan, and calls for blocking of assets in the U.S. of senior leaders and their family members.