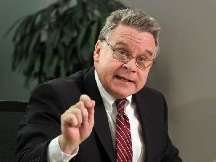 The latest move, however, might be unpleasant news for the Aliyev government's propaganda machine, as Congresswoman Slaughter is known to Azeri audience with her 2013 letter supporting Baku's campaign honoring the 2015 March events, as well as Azerbaijani Remembrance Day. (http://news.az/articles/politics/78521)

In the meantime, Congressman Smith on Thursday, took an initiative and commented on Baku's accusations against his action and the legislation, calling them "false and very foolish."

The "Azerbaijan Democracy Act," he said, had nothing to do with Armenians -- it's all about human rights in Azerbaijan.

Speaking at the Helsinki Commission hearing titled 'Update on the OSCE: Religious Freedom, Anti-Semitism, and Rule of Law,” on February 11th, Congressman Smith added the followings:

"When more individuals including journalists, such as Khadija Ismayilova, were arrested for doing investigative journalist work, we put together a very comprehensive 'Azerbaijani Democracy Act' and introduced it. The react by the Aliyev government to it, including of the Parliament, has been startling foolhardily, because they have been claiming things that are absolutely untrue: they claim that Armenians put me - Chris Smith - up to it. The Armenians had absolutely no input, advanced notice, or anything else about the bill... So, when I hear this coming from the Parliament, major media, and Presidential spokesman, I wonder about their credibility on other things..."

The purpose of Azerbaijani Democracy Act is, as Congressman put it, is to seek reforms in Azerbaijan. "Let people out of prison who have committed no crime!," he said.

"When investigative journalists do things here -- on corruption or anything else, -- they get prizes. In Azerbaijan thought they go to jailed," he added.

Addressing the hearing, Michael Georg Link, director of OSCE’s Office for Democratic Institutions and Human Rights, said that a free media landscape is part of the "normal early warning process" that should happen in a civil society.

"If you shut down independent media, if you don’t have a pluralistic approach in media, as diverse a approach as possible, then a society can go very, very wrong,” he said adding that countries like Azerbaijan should'understand that "there is no lasting security without human rights.'

In his question Congressman Smith also raised concerns over the lack of efforts around Nagorno-Karabakh peace process, adding that "we don't want to see anyone get hurt."

* The "Azerbaijani Democracy Act" was assigned to three congressional committees -- Foreign Affairs, Justice and Financial Services - which will consider it before possibly sending it on to the House or Senate as a whole.