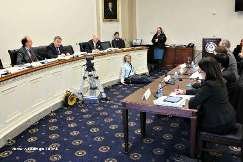 ‘We recognize that there are important national security and economic ties that exist between our two countries, but the U.S. can no longer remain blind to the appalling human rights violations that are taking place in Azerbaijan,’ said Congressman.

The 14-page long bill was referred to the House Committee on Foreign Affairs and ‘it’s yet to be announcedwhen [the bill] will come to the floor for a full vote,’ a congressional source told TURAN.‘It might take a few months though,’ he added.

Congressmen Smith, a long-standing advocate for human rights in Azerbaijan, told TURAN’s correspondent that his main purpose by initiating the bill was ‘to promote and encourage freedom for all good peoplein Azerbaijan who just want to tell the truth’

‘Investigative journalism is very important part of the healthy society; let it flourish,’ he said, adding that the arrest of Khadija and other political prisoners is ‘the sign of weakness, not the sign of strength.’

If passed into law, the bill’s operative section denies U.S. visas for senior leadership of the Azerbaijani government and their immediate family members; those who derive significant financial benefit from business dealings with senior leadership or their family; and members of the security or judicial branches.

An exception is made for travel to the U.S. by officials for participation in the OSCE Minsk Group meetings related to settlement of the Nagorno-Karabakh conflict between Azerbaijan and neighboring Armenia.

The Sense of Congress addresses a prohibition on loans, insurance or financing through U.S.-funded programs; discourages multilateral finance assistance for Azerbaijan, and calls for blocking of assets in the U.S. of senior leaders and their family members.

‘It is the sense of Congress that the President should continue to seek the support of other countries, particularly European countries, for a comprehensive, multilateral strategy to further the purposes of this Act, including, as appropriate, encouraging other countries to take measures with respect to the Republic of Azerbaijan that are similar to measures described in this Act,’ reads the bill.

In his speechbefore the hearing, Congressman Smith said, ‘It is unacceptable that senior members of the Azerbaijani government are free to visit the U.S. while courageous women and men like investigative journalist Khadija Ismayilova, attorney IntigamAliyev, opposition politician IlgarMammadov, and activist AnarMammadli are locked away in prisons with inadequate access to legal or even medical assistance,’

"If they can pay the price for standing up for human rights, the least we can do is to stand with them.”

In the meantime, sanctions could be lifted when the Azerbaijani government shows substantial progress toward releasing political prisoners, ending its harassment of civil society, and holding free and fair elections, according to the Azerbaijan Democracy Act, which was also announced during the hearing.

Speaking at the hearing, Senator Ben Cardin, a leading member of the Helsinki Commission, said the U.S. government has special obligation to help secure Khadija’s release, as she reported a journalist for US-funded RFE/RL.

The State Department, Senator Smith added, ‘must leave no stone unturned to secure release of Khadija.’

The commission members also underscored that reporting on human rights abuses is riskyin Azerbaijan; the country currently holds ‘at least 12 journalists and bloggers.’

Khadija’s crime he said, is ‘being nothing more than doing her job as a journalist – reporting about important developments inside the country, including corruption.’ Even in prison she is prevented by authorities to freely speak to her mother and was banned from writing.

As for the radio’s current status in Azerbaijan, he said, after raid on the Baku bureau several staff fled the country while others ‘no longer reporting and remain unemployed.’

‘Our former Baku chief, BabekBagirov, remains under a travel an and cannot leave the country.’

In her testimony DelphineHalgand of Reporters Without Borders, called on the U.S. administration to demand from Azerbaijan to free all jailed journalists. At least 4 journalists were murdered, many more attacked during past several years, she said, adding that impunity for violence against journalists is systematic.

Helsinki Comission’sPolicy Advisor Shelly Hanadded that the Azeri activists‘determined to continue fight for humanrights, motivated by bravery of Khadija.’

Another speaker T. Kumar, international advocacy director of Amnesty International USA, urged the Congressmento stand firm, ‘ask to see Khadija Ismayil in person.’  U.S. Ambassador to Baku ‘should engageAzerbaijan stands out as an example of how to silence critics.’

Speaking to TURAN’s correspondent a Helsinki Commission representative described the bill as ‘a strong policy response to unprecedented attack on democracy, human rights’ in Azerbaijan. The legislation,he said, is modeled on the Belarus Democracy Act, which was passed into law during a harsh crackdown on civil society in that country.