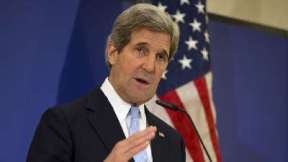 "We welcomes the positive step by the Government of Azerbaijan to release more than a dozen individuals incarcerated for their work on human rights or for their exercise of fundamental freedoms. We look forward to working with Azerbaijan on additional positive steps,' Secretary of State John Kerry noted in a press statement.

"We also urge the government to release the remaining individuals widely considered to have been incarcerated for exercising similar freedoms and to end restrictions placed on the movement of those released," reads the statement.

Among those still imprisoned in Azerbaijan are journalists Khadija Ismayilova, Nijat Aliyev, Araz Guliyev, Seymur Hazi as well as dozens of other political prisoners.

"I am happy for the release of the prisoners, especially those held for political reasons. However, as long as between 80 and 90 other political prisoners remain unjustly deprived of their freedoms,  this is not the time to see these releases as a turn away from authoritarianism in Azerbaijan," Richard Kauzlarich, former US Ambassador to Azerbaijan, told TURAN's Washington correspondent.

More importantly, he said, the US Government should not "reward” the regime with either praise for releasing people who should not have been arrested in the first place, or with high-level meetings with Azerbaijani officials. "If we do, we turn these poor people into hostages — bargaining chips in the Azerbaijan regime’s effort to gain political and economic benefits from the US and Europe."

For Ambassador Kauzlarich, until all the political prisoners are free — and not just conditionally free as seems to be the case with Leyla and Arif Yunis and Rauf Migadyrov — the US and Europe "must maintain a tough stance regarding acceptance of Azerbaijan as a partner that shares common Western values regarding democracy, human rights and freedom of expression."

In response to the release of 14 political prisoners, top US Congressman Chris Smith (NJ-04), Chairman of the Commission on Security and Cooperation in Europe, also issued a statement:

"I am relieved to know that these wrongly-held prisoners will be home with their families soon, but I remain concerned about the plight of the many other prisoners in Azerbaijan who are being held on politically-motivated charges," he noted.

"Anar Mammadli, the founder of an independent election monitoring group, was released, but he should have never been in prison. There are many others who should be released as well, such as Khadija Ismayilova, Intigram Aliyev, Ilgar Mammadov. "I respectfully request President Aliyev to not only release all political prisoners, but also repeal the many undemocratic laws and regulations that prohibit the exercise of universally-recognized human rights in Azerbaijan,” he noted.

Chairman Smith is the sponsor of the Azerbaijan Democracy Act of 2015 (H.R. 4264), a bill he introduced on December 16, 2015, to draw attention to the systematic efforts of the Government of Azerbaijan to eliminate the voices of independent journalists, opposition politicians, and civil society groups.

In addition to denying U.S. visas to senior leaders of the Government of Azerbaijan, those who derive significant financial benefit from business dealings with senior leadership, and members of the security or judicial branches, the Azerbaijan Democracy Act also expresses the sense of Congress that financial penalties should be considered.

Sanctions could be lifted when the Azerbaijani government shows substantial progress toward releasing political prisoners, ending its harassment of civil society, and holding free and fair elections.

Congressman Eliot L. Engel, ranking member of the House Committee on Foreign Affairs, also made a statement regarding the release of 14 political prisoners.

"While I'm relieved that these individuals are no longer behind bars, many others remain and I call on our own administration to urge President Aliyev, when he visits Washington in two weeks, to free them as well," he noted.

"I greatly value the friendship between our countries.  I also hope for continued reforms that will give the people of Azerbaijan the freedom, security, and prosperity that all people desire and that will allow our two countries to deepen their cooperation in critical areas such as counterterrorism and energy."