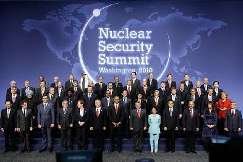 The world leaders, heads of governments are expected to gather in Washington D.C. later in March by the invitation of U.S. President Barack Obama to attend the final Nuclear Security Summit, a high-level event that has been taking place since 2010 to transform worldwide cooperation to secure nuclear weapon materials.

While an official announcement with regards to the invitations is yet to be made, TURAN's Washington correspondent was informed by two different sources that Azerbaijan's Ilham Aliyev is 'less likely to be expected at the summit' due to his government's failure to improve the situation over crackdown against independent voices and West-backed civil society groups.

'As the situation around political prisoners is yet to be solved in Azerbaijan, western partners find themselves in an uncomfortable position while engaging with the Aliyev government, including the case of issuing high-level invitations,' a former U.S. diplomat, who closely follows Azerbaijan, told TURAN's correspondent. Officials in Washington had no immediate comment when contacted about this report.

The final Nuclear Security Summit (NSS) had been formally announced by President Obama in 2014 in Berlin. Recognizing that nuclear terrorism is the greatest national security threat the world faces, the U.S. President convened leaders of 47 nations and three international organizations to Washington in 2010 to generate and highlight the political will to lock down nuclear material and intercept nuclear smugglers.

Aliyev, who reportedly felt slighted and protested when he was not invited to the first NSS in 2010, was yet able to make it to the second (Seul, 2012) and third (Hague, 2014) Summits.  Baku officials pointed out that the country’s location between Iran and Russia makes it 'relevant' for any consideration of trafficking in nuclear materials.

While Washington is reportedly reluctant to send an invitation to the oil-rich country with poor human rights record, Azerbaijan's neighbor Georgia has already received an invite message from the White House.

In his letter to Georgian PM Irakli Garibashvili, President Obama expressed his hope that  Georgia 'will continue to prioritize efforts to interdict nuclear and radiological materials outside of regulatory control' and share its extensive experience in this area with other partner nations.

Because nuclear security is not the responsibility of governments alone, the White House welcomes the plans of the nuclear industry and the non-government expert community to host side summits, addressing their roles in enhancing nuclear security.