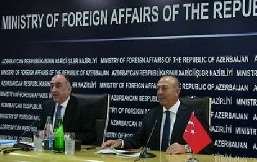 The Turkish Foreign Minister Mevlut Cavusoglu paid an  official visitto Azerbaijan, during which he met with President Ilham Aliyev, Speaker of Milli Majlis Ogtay Asadov, Foreign Minister Elmar Mammadyarov. Vriefing took place after  one-on-one meeting of the foreign ministers of Turkey and Azerbaijan. Both Ministers noted the high level of relations between the two countries.

Cavusoglu  said that the  parliamentary elections held in Azerbaijan were demioctaric. The two ministers discussed the Karabakh conflict, TANAP project and the Baku-Tbilisi-Kars.

Regarding the Karabakh conflict Elmar Mammadyarov  said that during his visit to Baku and Yerevan, Russian Foreign Minister Sergey Lavrov stressed the importance of progress in the settlement of the Karabakh conflict. "Everyone understands that the deployment of Armenian troops on the territory of Azerbaijan is a big problem for the security of the region," said Mammadyarov.

According to him, Lavrov put forward proposals on behalf of the co-chairs. "When the co-chairs visited the last time it was proposed to hold a meeting at the presidential level. Azerbaijan has agreed to this meeting. By the end of next month, this meeting could take place," the minister said.

Turkish Foreign Minister once again confirmed that Turkey will always support Azerbaijan in the Karabakh conflict settlement,  and the return of  occupied territories to Azerbaijan. "We want  the OSCE MG be more active. Azerbaijan and Turkey   will reach its purpose  together," Cavusoglu said.

Both sides believe the successful progress of the project TANAP (Trans-Anatolian Pipeline.) At the same time it was noted that the project of Baku-Tbilisi-Kars there are delays on the Turkish section of the project. According to him, until the end of this year in Tbilisi will be  held meeting of foreign ministers of Azerbaijan, Turkey and Georgia. All three ministers will conduct inspection of the railway line. "There is a delay in  the construction of the road.  This is due to the legal problems of the construction company. If not this year, then next year the project will be completed. Thanks to this road Azerbaijan and Turkey will play an important role in the region from Europe to China, " Cavusoglu said. According to him,  in 2016 the meeting of Foreign Ministers of Azerbaijan, Turkey and Turkmenistan will take place.

Both ministers went did not mention the Syrian crisis and the Russian-Turkish relations. The journalists were not given the opportunity to ask questions.