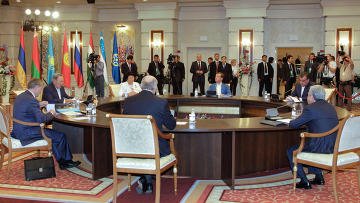 Bishkek is hosting the CSTO Council of Foreign Ministers. They developed a plan for consultations for foreign policy, security, defenses for the second half of 2013 and first half of 2014, RIA Novosti reports.

The CSTO sees only peaceful solution of the Nagorno-Karabakh conflict and emphasized the role of the OSCE MG, UN Charter and the Helsinki Accords in settling the conflict. Use of force is unacceptable.

Foreign ministers see no military solutions to the Iranian nuclear problem. Instability of the Middle East and North Africa on the background of confrontation may cause unpredictable repercussions. The CSTO members note the right of each state for peaceful nuclear developments under monitoring of the IAEA.

Concerning the Syrian crisis, the foreign ministers say that it should be overcome by the population itself. They want the violence in Syria to be stopped and negotiations between the government and opposition to start. The CSTO is opposed to terrorism, violence against the population, militarization of conflict.

The ministers expressed support of the Russian-US conference on Syria.

Lavrov added that they discussed mechanisms to enforce security and peacekeeping efforts of the Collective Rapid Reaction Forces.