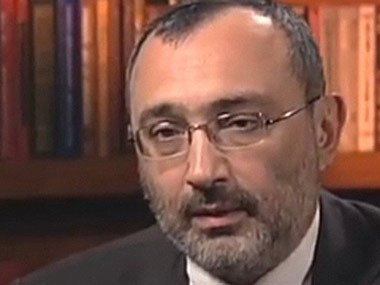 Minister of Foreign Affairs of the Nagorno Karabakh Republic Karen Mirzoyan, who was on a visit to France from 10 to 12 June, gave an interview to France-24 TV channel.

The NKR Foreign Minister answered a range of questions related to the history of the Karabakh conflict, its current stage and prospects of settlement, humanitarian issues, the economic situation in Artsakh, etc.

Introducing the history of the conflict between Azerbaijan and Nagorno Karabakh, Karen Mirzoyan noted that the movement of 1988 had been a struggle not only for reunification with Armenia, but also for human rights, social and economic equality and a secure life. However, as the Minister noted, the peaceful rallies of the youth, students and workers were responded by Azerbaijan with Armenian massacres in Sumgait, Baku, Kirovabad, and other Azerbaijani towns, which were followed by aggression against proper Nagorno Karabakh.

“Azerbaijan must, first of all, change its stance – it is a country, which constantly enhances its xenophobia and hatred against everything Armenian”, Karen Mirzoyan said.

He emphasized that the conflict could not be resolved by force, as a war would have disastrous consequences for the entire region.

The NKR Foreign Minister also dwelt on the economic situation in Artsakh, the achievements and prospects of development of the priority spheres.

Touching upon the humanitarian issues, Minister Mirzoyan focused on the problem of the Armenian refugees living in Artsakh, who, unlike the Azerbaijani ones, are deprived of international assistance.

Karen Mirzoyan expressed confidence that sooner or later a peaceful settlement of the conflict would be reached, which would ensure the safe development and prosperity of the two independent states – Nagorno Karabakh and Azerbaijan.

According to the Foreign Minister, the final settlement of the conflict with Azerbaijan is possible only under the full-fledged participation of the NKR in the negotiations.