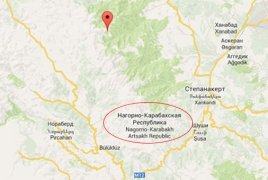 PanARMENIAN.Net - Azerbaijan is in the throes of another fit: Artsakh was indicated on Google maps as the Nagorno Karabakh Republic.

The fact outraged Baku which hurried to call the move as Google’s "another provocation against Azerbaijan.”

The Republic Seismological Service Center under Azerbaijan National Academy of Sciences (ANAS) "raised the alarm” on the fact.

"We are concerned about such provocations against Azerbaijan and its territories by the international search system and the RSSC strongly condemns such provocative changes against our country on the map,” the Center said, according to APA.

APA further noted that this is not the first "provocation” committed by Google: "Such cases took place earlier as well.”