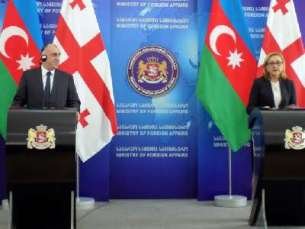 During the official visit to Georgia, Azerbaijani Foreign Minister Elmar Mammadyarov met with his Georgian counterpart Tamara Beruchashvili.  A press confernce was held after thne meeting.

The Georgian Minister noted that these projects are of particular importance for the economy, the independence, and the future of Georgia. At the  joint press conference Beruchashvili expressed a desire of Tbilisi to participate actively in the project of the Southern Gas Corridor. She also noted the importance of trilateral cooperation between Baku, Tbilisi and Ankara in the field of security and energy.

The two ministers stressed that the country supports the territorial integrity of each other.