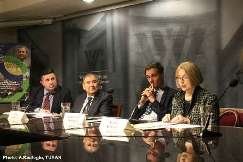 Veteran U.S. diplomatsand analysts specializing in the Caucasus urged Washington to take a harder line to defend its values and supporters in the countries like Azerbaijan, where the government continues its crackdown against independent voices.

'We should have stood up for freedoms and rights in Azerbaijan long ago,' Richard Kauzlarich, former U.S. Ambassador to Azerbaijan said on Tuesday.

'Democracy and human rights has to be part of any dialog between U.S. and Azerbaijan,' Ambassador Richard Morningstar, who returned from Baku two years ago, added.

Speaking about the current crackdown on independent voices in Azerbaijan, Kauzlarich said, it was orchestrated not only against local civil society, but also against the U.S. and its institutions.

'I just can't understand what [they Azerbaijani government] hope to gain from these all... Why they would arrest one female journalist and one female NGO representative, whose only weapons against the government were their words,' he said adding that if Baku seeks better relationship with the West, it should start by releasing political prisoners: 'Leyla Yunus shouldn't have been arrested; she should be released and there is no reason why that cannot happen.'

Ambassador Morningstar underscored that he also looks at current bilateral relationship 'with some disappointment.'

'Despite the fact that our countries have very common strategic interests our relationship remains problematic,' he said.

Two major factors have contributed to that, he outlined: First, human rights issues, particularly since the latest presidential election in Azerbaijan, and second, 'lack of progress towards the settlement on Nagorno-Karabakh dispute.'

'The U.S. ‘has always spoken up for the sovereignty and independence of Azerbaijan,' he said, adding that it's crucial for Azerbaijan to maintain good relations in its region.

For Morningstar, 'some in the Azerbaijani government' truly do believe that Washington is looking for a regime change in their country. That, he said, is just not true:

'That's just none of our business and for the people of Azerbaijan. But to have a strong relationship between our countries it's critically important democracy and human rights are major parts of the dialog.'

Beyond that, the ambassador said Azerbaijani authorities 'should recognize that many of things they've done are totally unnecessary' and have only served to create this vicious circle on our relationship.' 'There is no reason why all of those political prisoners are need to be in jail.'

Looking ahead he said, some regional developments, especially recent Russian-Turkey crisis could have a positive affect on U.S.-Azerbaijani relationship and 'ultimately on democracy and human rights issues.'

Therefore, he explained, Azerbaijan has to be careful with respect to this [new regional] situation. It has been taking a relatively neutral role. It's important Azerbaijan maintains good relations with both Turkey and Russia'

Kauzlarich added, due to achieving any long tern regional peace, Washington should encourage Baku and Yerevan to finally resolve this conflict.'What can the Obama Administration do?' he asked, adding it's necessary to get the attention of both Armenia and Azerbaijan.

'The Administration in Washington should do to the Congress and ask for the repeal of Section 907 of the Freedom Support Act. To get Azerbaijan's attention, the U.S. should issue travel sanctions on Azeri officials, who are responsible for the detention and arrest of political prisoners.

'This, Azerbaijan will have a choice: Either releasing those people who shouldn't be arrested in the first place, or facing consequences.

Washington also needs to look at its priorities in the region and see if there was a way finally to find a positive agenda for regional cooperation. That would involve Azerbaijan, Georgia and Armenia along with E.U. and Turkey.

'Azerbaijan tells us that they want to have our respect. So they can have it! We have to help them to find how they can earn that respect,' Kauzlarich said.

The U.S. he added, also have to help Azerbaijan to find its energy priorities since demand for gas in Europe is going down while competitors for Azerbaijani oil are multiplying.

For Kenneth Yalowitz, former U.S. Ambassador to Georgia, given current oil prices and unless the Azeri leaders pays attention on diversifying its economy, the new reality 'creates a condition for Dutch desease in Azerbaijan.'

Azerbaijan, he said, has long been linking its strategic partnership with the West to it's importance as an oil supplier, albeit 'that will not not be the case soon.'

In such situation, he said, Baku needs to review its relationship with Europe. 'Even that balanced foreign policy is increasingly danger at the moment at least internally...'

Accepting the Ion Ratiu Democracy Award Jamil Hasanli, an historian and National Council leader in Azerbaijan, told the audience that strategically, Baku has an interest in boosting relations with the U.S. but it shouldn't be on the expense of U.S.' giving up its own interests.

'The Azerbaijani government doesn't respect its own people. In the past it would arrest opponents for something, but now for absolutely nothing.'

As Washington's 'quiet diplomacy' with Baku remains unsuccessful, Hasanli said, the West 'shouldn't be silent in protection of independent voices: Pressure against all the independent media is an example of authoritarian system in Azerbaijan,' he said.