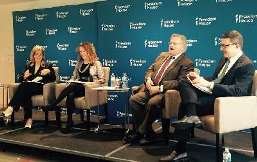 Veteran U.S. foreign policy experts və former human rights diplomats urge Washington to stand up for independent voices all around the world at the time when authoritarian regimes tighten their control and crackdown on civil society, TURAN's Washington correspondent reports.
'Democracy., human rights should have a central place in U.S. foreign policy,'  Paula Dobriansky, former undersecretary of State specializing in human rights and national security affairs, said at Freedom House on Wednesday. 'It has to be a priority and it cannot be sidelined,' she added.Speaking on US' efforts to bolster civil society as force for democracy and stability,  Antony J. Blinken, deputy secretary of State, said, 'stability' often used by authoritarian regimes as a code word for keeping entrenched interests in power.  "The best guarantor of peace, stability is democracy, not crackdown,' he added.For Elliott Abrams, former national security adviser in the administration of President George W. Bush, the cause of democracy of the world and the reputation of the U.S. must be linked. 'In individual country and institutional cases, we could and should push a lot harder on human rights," he said adding, to promote human rights, it is important to reach out to those who are oppressed, versus reaching out to oppressors.Suzanne Nossel, Executive Director of PEN American Center, agrees that the defense of dissidents and outreach to civil society is critical.'U.S. is still place that dissidents look to. Standing for critical voices is important,' she said.Oleksandra Matviychuk, director of the Ukraine-based center for Civil Liberties, states that Ukraine’s fight for its destiny is symbol of hope in post-Soviet space.'We ask governments and supporters at all level to include civil society in all efforts in Ukraine,' she said. "Spreading democracy to more countries is the only way to live in a safe world." A.Raufoglu