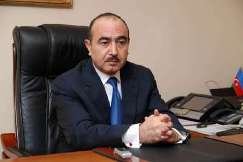 We value the US care about democracy, then let them first demand Armenia's fulfillment of the UN resolutions, the Presidential Aide for Public and Political Affairs Ali Hasanov said, commenting on the US State Department report on the situation of human rights and freedoms in the world.

In this sense, the human rights situation in the United States is not good, as evidenced by the events in Baltimore and Ferguson, Hasanov said.

In addition, the current deplorable situation in several countries in the Middle East is also a result of US policy, and the policy of the West in general.

No country can be a global judge and dictate its views to others. With regard to the State Department report, the assessment of the situation in Azerbaijan does not correspond to reality. In Azerbaijan, there is stability, democracy and a healthy civil society, said Hasanov. He also claims that the report did not include a word about the destructive policy of Armenia on the Karabakh conflict.

In turn, the press secretary of the President Azer Gasimov said that the report of the State Department and the resolution of the Council of Europe on Azerbaijan were taken under the influence of anti-Azerbaijani forces and the Armenian lobby.

According to him, the European countries are going through a deep crisis and are not independent. Therefore, they are jealous of Azerbaijan and cannot accept the fact that Baku keeps an independent policy.

However, all these forces should know that Azerbaijan will continue to pursue an independent policy and will not change its course, Gasimov said.