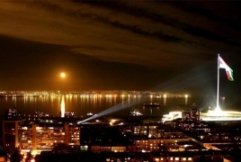 PanARMENIAN.Net - A statement by the U.S. Ambassador Richard Morningstar, criticizing Azeri policies and democratic situation, came as a cold shower to Baku.

The envoy’s remarks were slammed by Azeri Foreign Ministry, which accused the U.S. of "interference in Azerbaijan's internal affairs and attempts to direct it.”

"We are a state that has gained plenty of achievements, implementing reforms in many fields. We are a country that is presented to the international community as a successful model. Many influential countries approve of Azerbaijan’s flourishing development model, and stress that it pursues a wise domestic and foreign policy in many cases. In a short period, Azerbaijan was able to do what many Western countries, including the US, failed to accomplish for decades. We repeatedly noted that politically motivated statements of this sort and attempts to interfere in the work of independent courts cast shadow on relations between our countries,” APA quoted Azeri foreign ministry spokesman Elman Abdullayev as saying.

The spokesman here did little more than voice everyday formulas replicated by Azeri officials who deceive themselves into thinking the world is unaware about the truth about human rights, development and dire social situation in the country. Other than a small circle of President Aliyev’s palls, the majority of Azerbaijanis live on the brink of poverty: according to Gallup, the jobless rate is Azerbaijan nears 20% (as opposed to the statistical service-claimed 5,2%), with unemployment in Baku reaching 10%.

The republic, boasting of "countless hydrocarbons” sees continuous cuts of gas supplies and petrol shortage, with investors less than happy about oil and gas production rates.

With continuing military rhetoric and attempts to cultivate an "enemy image” of Armenia, Morningstar’s remarks on a possibility of Maidan-like events in Azerbaijan can be construed as a friendly warning. However, Baku, cocksure of it impunity, continues acting without fear for repercussions. If Morningstar’s statement was met with such nervous reaction, response to similar statements by other U.S. diplomats might plunge it into hysteria. Yet, the U.S. is not the country to bear to be admonished by Baku.

"I have been engaged in U.S. – Azerbaijani relations since 1992 and I haven’t seen a situation worse than the one that currently exists in Azerbaijan,” former U.S. Ambassador to Azerbaijan Richard Kauzlarich (1994-1997) said recently when answering questions from the Azerbaijani news agency Turan.

"The American Co-chair of the OSCE Minsk Group, James Warlick, is being criticized in Azerbaijan, while U.S. Congressmen are accused of espionage. At the same time, the Azerbaijani authorities are financing an Azerbaijani-American conference to be held in Washington "to support the U.S.-Azerbaijan strategic partnership”,” the ex-envoy said.