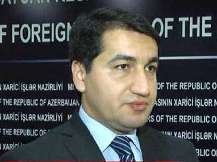 Official Baku will continue to reject the criticism of Washington on violations of human rights, and considers it necessary to develop bilateral relations on the basis of the principle of non-interference in internal affairs. It is a keynote of the interview of the Azerbaijani Foreign Ministry spokesman Hikmet Hajiyev  with the radio "Voice of America".

The US-Azerbaijani relations are characterized by cooperation in the field of global energy security, counter-terrorism and other transnational threats, logistical, and financial support for transit operations in Afghanistan.

Over the first nine months of 2014 the trade turnover between the two countries reached $800 million dollars. Since September AZAL aircraft began to make direct flights from Baku to New York that promotes activation of ties in all fields.

The first Azerbaijani telecommunication satellite was also made in the USA. All this contributed to the discovery in the United States of thousands of jobs, which is a contribution to the US economy.

Baku hopes that the United States as one of the co-chairs of the OSCE Minsk Group will take more decisive steps to resolve the conflict on the basis of the territorial integrity of Azerbaijan, said a spokesman for the Azerbaijani Foreign Ministry.

He further recommended the United States to pay attention to internally displaced persons and refugees, deprived of the vital rights of Armenian aggression.

Commenting on accusations of Baku on human rights violations, Hajiyev said that in 2014, there were "certain undesirable moments" in bilateral relations.

Under the influence and pressure of the Armenian lobby and other anti-Azerbaijani elements, some local and international NGOs spread biased information about Azerbaijan. Based on these information, Washington, in some cases without any serious grounds acted with unilateral declarations, he said.

"Activities of such circles, first of all, is a blow to US national interests," said a spokesman for the Foreign Ministry.

Democracy and human rights - human value and there is no single model of democracy. "No country has the right to talk about its excellence in this area, and teach others,"  said Hajiyev.

Azerbaijan is determined to continue to develop its successful model of political, economic and social development, he said.

Hajiyev declined to answer the question, what will make Baku in the event of sanctions by the United States.

"I do not want to express attitude to the frivolous and unfounded illusions  by some individuals acting under the dictation of specific terms, including the Armenian Diaspora,"  he said.

According to him,  in the international relations a sanctions regime is regulated by the UN Charter and applicable only in case of violation of international law, and in particular, the provisions of the Charter of the UNPO. So, sanctions should be applied against Armenia as an occupier of Azerbaijani territory, he said.

Concerning the prospects of bilateral relations, Hajiyev said that Azerbaijan pursues an independent foreign policy and building relationships based on the principles of equality and non interference in internal affairs.

On the basis of these principles, there are opportunities for the development of relations in the field of tourism, humanitarian, scientific, educational, trade, information and communications, civil aviation, said a representative  of the Foreign Ministry.