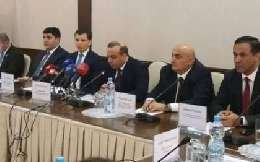 Azerbaijani authorities, always declaring their commitment to  the principle of non interference in the internal affairs of other countries seem to be changing their policies.

In recent years, official Baku is concerned with the problems of human rights and democracy in the world. Moreover, this "anxiety" is selective. Thus, Baku "symmetrically" responds those states which criticize Azerbaijan for human rights violations. Manifestation of this became today's hearing on the US-Azerbaijani relations, organized by the Council for State Support to NGOs under the Azerbaijani President.

The chairman of the Council, Azay Guliyev, said that relations between the two countries have entered into a "hot phase". He said that recent statements by the US government institutions in relation to Azerbaijan are "biased, far from the truth, do not serve the strategic partnership." "We also decided to hold a hearing and to assess the human rights situation in the United States,"  he said proudly.

According to him, the US does not have the right to criticize Azerbaijan, because they themselves have racial and religious discrimination, operates the prison at Guantanamo Bay, events occur in Ferguson.

According to Guliyev, behind the critical statements of the former US Ambassador Richard Kozlarich and ex-deputy of the State Department official David Kramer stands  official Washington. A member of parliament, Zahid Oruj,  is concerned about discrimination against blacks in the United States who are facing "serious problems" in education. Political scientist Elman Nasirov made a "sensational" allegations of corruption in the United States. According to him, in 2012 to become the ambassador of America in France and Monaco, it was necessary to invest into the election fund of US $550,000-$700,000.

The head of the United Popular Front Party, MP Gudrat Hasanguliyev, in turn, tried to prove the absence of the US "free press." According to him, "Radio Azadlig" is not an independent radio and promotes American ideology. Hasanguliyev considers that the cause of the deterioration of bilateral relations was the refusal of President Ilham Aliyev to go in 2009 in Istanbul at the invitation of Barack Obama and Hillary Clinton.  It was supposed to exert pressure on the head of Azerbaijan to consent to the opening of borders between Turkey and Armenia, he said. However, he noted that because of the "4-5 prisoners it is not right  to make a confrontation with the great powers."

The head of the Democratic Reforms Party, MP Asim Mollazade said about the change in US policy toward Azerbaijan "in order to implement that dictate the Armenians."

The head of the Karabakh Liberation Organization Akif Nagi said that the  United States "remains the only imperialist and terrorist state in the world, and use all means to subdue the  states to their will."  The  US  is guilty of unresolved Karabakh conflict, he said.

The MP  Musa Gasimli  condemned the US of double standards and support of the Karabakh separatists.

The MP from the ruling party "Yeni Azerbaijan" Aydin Mirzazade also accused the US of "unfair" approach to the Karabakh problem because of what Washington can "lose" Azerbaijan.

The event was held at the International Press Center. Usually this structure sends invitations to such events. However, there was not information about this event , and  many journalists were unable to participate and ask uestions about the sources of this information.

All the participants are representatives of the pro-government sector.