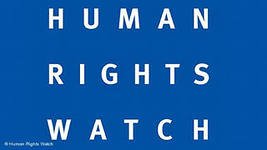 In a statement on May 1, HRW's deputy Europe and Central Asia director, Rachel Denber, called on the Council of Europe, Europe's foremost human rights body, to evaluate the situation faced by Yunus and her husband, Arif Yunus, and tell Baku that "this conduct is utterly inappropriate."

Azerbaijan is expected to take over the rotating chairmanship of the Council of Europe in mid-May.

The couple were detained on April 28 at the Baku airport.

Yunus was released from detention on April 29 after she was questioned by investigators and the offices of her Baku-based Peace and Democracy Institute were searched.

Her husband was hospitalized with heart problems after the detention and released next day.