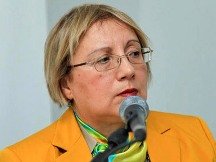 Human rights organization Amnesty International calls everyone to address a letter to the President of Azerbaijan Ilham Aliyev and to the Prosecutor General Zakir Qaralov calling on the authorities to put an immediate stop to the intimidation and harassment of Leyla Yunus and her husband Arif Yunus. The call and the sample of the letter are posted on the website of the organization.

Amnesty International notes that since 28 April 2014 the Azerbaijani authorities have been harassing human rights defender Leyla Yunus, who is the President of Azerbaijani NGO the Institute for Peace and Democracy.

"The authorities have regularly summoned her to the prosecutor’s office and interrogated her in connection with the criminal proceedings against an independent Azerbaijani journalist Rauf Mirgadirov, who has been arrested on what appear to be trumped-up charges of spying for Armenia. Leyla Yunus had been collaborating with him on joint reconciliation projects with Armenian NGOs,” the statement reads.
According to AI, Leyla Yunus and her husband were detained on 28 April at the airport and the next day, officials searched the couple’s home and the office of the Institute for Peace and Democracy.

Leyla Yunus accused officials of threatening to rape her and when a colleague of hers asked whether it was acceptable for a male police officer to behave like that, the latter replied, "She is not a woman. She is not an Azerbaijani woman. She is Armenian”.

AI is calling on the authorities to put an immediate stop to the harassment of the human rights defender, to return the passports to the couple, to start an impartial investigation and bring all those responsible to justice who harassed and ill-treated them.

Famous Azerbaijani human rights defender Leyla Yunus and her husband conflictologist Arif Yunus were detained on 28 April at Baku’s airport, as they prepared to board a flight to Doha. They were planning to fly to Paris and then to Brussels as they were invited by the EU for participating at an international event.

Leyla Yunus was summoned to an interrogation to the department of grave crimes investigation of the General Prosecutor's office where she spent 9 hours. Her husband Mr. Yunus, who was detained together with her, was hospitalized in a pre-stroke condition. Also, officials searched the couple’s home and the office of IPD.

The Human rights commissioner at the Council of Europe Nils Muižnieks, the EU, the US State Department, the US Embassy in Azerbaijan and human rights organizations such as the Norwegian Helsinki committee, Human Rights Watch, Freedom House, the International Federation for Human Rights (FIDH) have all condemned the arrest of Leyla Yunus in Baku.