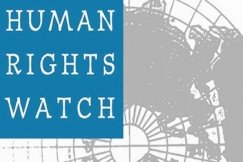 (Berlin) – Azerbaijani authorities should immediately secure the release of leading human rights defender Leyla Yunus from pretrial custody, and drop the politically motivated charges against her and her husband Arif Yunus. The authorities should also end their ongoing harassment against the couple.

"The context leading up to these recent charges, including the harassment they have endured over the past four months, make it clear that the charges against Leyla and Arif Yunus are bogus and intended to silence them,” said Rachel Denber, deputy Europe and Central Asia director at Human Rights Watch. "The authorities should immediately end this campaign of intimidation against Azerbaijan’s leading human rights defenders and allow them to work unimpeded.”

Azerbaijan’s international partners, including the Council of Europe leadership and its member countries, should make clear that continued harassment of human rights defenders, and the Yunuses in particular, will have direct effects on their relationships with Azerbaijan’s government.

Leyla Yunus is the director of the Institute for Peace and Democracy, a human rights group formed in 1995 that has focused on combating politically motivated prosecutions, corruption, violence against women, and unlawful house evictions. The organization has also been involved in projects aimed at improving people-to-people dialogue between intellectuals and community leaders in Azerbaijan and Armenia, against the background of the unresolved conflict in Nagorno-Karabakh, the autonomous enclave in Azerbaijan primarily populated by ethnic Armenians.

On July 30, 2014, at about 11:45 a.m., representatives of the Grave Crimes Investigation Unit of the General Prosecutor’s Office, detained Leyla Yunus on her way to a conference at a partner organization’s office and drove her to the general prosecutor’s office, Arif Yunus told Human Rights Watch.

Shortly thereafter, about six men in civilian clothes rang the bell at the Yunus’s residence. Arif Yunus refused to open the door until he could summon his lawyer, but by the time his lawyer arrived, the men were gone. Yunus decided to turn himself in to the general prosecutor’s office and arrived there with his lawyer shortly after 1 p.m.

Yunus told Human Rights Watch that he and his wife were accused of spying for the Armenian secret services and interrogated in separate rooms. He said that they chose to remain silent and not to respond to any questions because the charges were so humiliating and absurd.

The investigators claimed that the Yunuses have used foreign grant money to recruit Azerbaijani citizens to participate in second-track diplomacy efforts over the unresolved conflict of Nagorno-Karabakh, and used this as a cover for espionage.

Investigators also claimed that the couple operated an unregistered nongovernmental organization and failed to pay taxes on grants they received. While it is true that the Institute for Peace and Democracy is not registered, the authorities make it almost impossible for human rights organizations in Azerbaijan to register.

For health considerations, the authorities released Arif Yunus under house arrest and police supervision, while Baku’s Nasimi District Court sent Leyla Yunus directly from the courtroom to pretrial custody for three months. Arif Yunus told Human Rights Watch that his wife suffers from severe diabetes and requires special meals at certain intervals. He said he feared the authorities would not provide her with adequate care in detention.

"This arrest and the charges have been in the making for some months now and appear to be in retaliation for the Yunuses human rights work and their outspoken criticism of the authorities,” Denber said. "The authorities should immediately release Leyla Yunus from pretrial detention and drop the charges in the absence of any credible evidence that they are justifiable.”

On April 28, Baku airport police prevented the couple from leaving the country, confiscated their passports, and subjected them to a 24-hour ordeal of interrogations and house searches that led to Arif Yunus’s hospitalization with hypertension. The prosecutor’s office subsequently designated them witnesses in a treason investigation against an Azerbaijani journalist and civil society activist, Rauf Mirgadirov, who was deported from Turkey on April 19 and then arrested in Baku.

Since then the authorities have repeatedly summoned the couple for interrogations. However, the Yunuses have refused to cooperate with the investigation until their passports are returned and their freedom of movement restored. Arif Yunus said he believed an open letter Leyla Yunus sent to the president of Azerbaijan a day earlier about the arrests of youth activists, entitled "What Are You Afraid of, Mr. President?” infuriated the authorities and possibly led to her detention.

Azerbaijan has a long history of using bogus charges to imprison its critics, including on treason charges, Human Rights Watch said. In the past two years, Azerbaijani authorities have brought or threatened unfounded criminal charges against over 40 political activists, journalists, bloggers, and human rights defenders, most of whom are behind bars.

In August 2011, violating a court injunction, the Baku authorities demolished without warning a building owned by Leyla Yunus as part of a government land clearance to make way for a park and business area. The building housed the Institute for Peace and Democracy and two other human rights groups. Yunus had repeatedly criticized the government’s redevelopment plans for the area.

The crackdown on critical voices continued even as, on May 15, Azerbaijan took over the rotating chairmanship of the Committee of Ministers of the Council of Europe, Europe’s foremost human rights body.

"Azerbaijan takes pride in chairing this important regional institution, yet routinely violates the very values and rights protections on which it is built and for which it exists,” Denber said. "The least Azerbaijan’s partners in the Council of Europe can now do is to urge the government to release Leyla Yunus from pretrial custody and end its escalating persecution of government critics.”