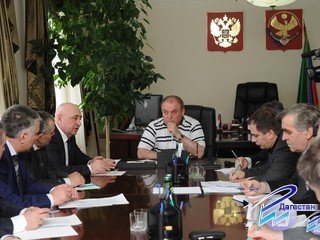 The Rutulsky district was the first to be visited. Here, in Rutul village, the region’s center, Mukhtar Medjidov and his entourage visited a number of social facilities under construction. Mukhtar Medjidov conducted a meeting on socio-economic development of the Rutul district in the regional administration.

Dawud Suleymanov, the head of the municipality, spoke about what had been done in the region as part of Dagestan investment program, and informed of the regional problems. Participants also discussed the problem of transport infrastructure development. According to the local authorities, five municipal settlements are out of reach due to absence of roads.

Then, Mukhtar Medjidov paid a working visit to Dokuzparinsky district, where he visited a hospital with a polyclinic for 58 under construction and an operating regional hospital for 40 in Ussukhchai village.

At the meeting, Kerimkhan Abassov, the head of the municipality, outlined the main areas of work in which they need government’s help. In particular, they discussed the events implemented in Dokuzparinsky district as part of the socio-economic development of Dagestan districts and cities.