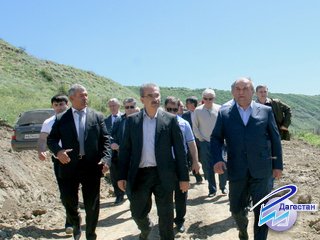 At first, Mukhtar Medjidov and his entourage visited Eminkhiur village, Suleiman Stalsky region, where they saw the acting school and a model school for 420 under construction. Then, in Kasumkent village, they visited a sports complex under construction and a regional hospital where Mukhtar Medjidov inspected the rooms, wards, and talked with patients and medical staff.

The next facility to see was the new «Mever» plant producing non-alcoholic drinks where the prime minister personally inspected the plant’s equipment and learned about the production process. To this moment, the plant has employed 100. The plant produces still water in different containers.

Later, Mukhtar Medjidov visited the Gassan Efendi Alkadarsky museum named after a major Daghestani scholar, historian, jurist, poet, and philosopher, where the prime minister got acquainted with the exhibits of the museum, and left a note in the guestbook.

After visiting the memorial structures dedicated to famous natives of Suleiman Stalsky region, Mukhtar Medjidov headed for Kurakh region where he visited the local Kabir hospital. There Medzhidov inspected the rooms and wards, talked to patients and medical staff.

After visiting the House of Culture in Ikra village, Kurakh municipality’s head Zamir Azizov conducted the first workshop in the municipality’s building where he outlined the main areas of work requiring government’s help. Then the delegation went to Suleiman Stalisky region, where Mukhtar Medjidov chaired the second workshop dedicated to issues of socio-economic development of Suleiman Stalsky region.