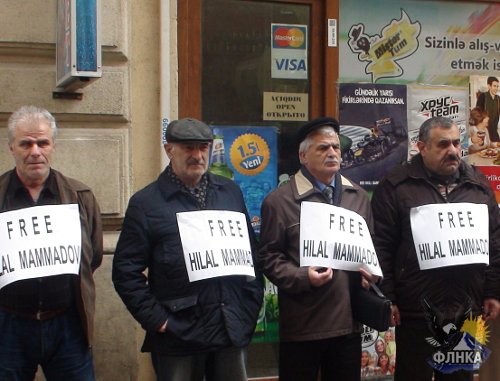 In Azerbaijan, the Committee to protect the rights of the editor-in-chief of the newspaper "Tolyshi Sado" (Voice of Talyshes) held a picket in front of the Baku Court of Grave Crimes, timed to the next court session on the Hilal Mamedov's case. The protest action was attended by about 30 persons.

The court session was scheduled for 11:00 a.m. (about 10:00 a.m. Moscow time). The members of the Committee expected to attend the court session, since they believed that court hearings on charges of treason and incitement of ethnic hatred had been completed and that the court would start to consider the case under the Article "illegal possession of drugs".

However, prior to the trial, the supporters of Hilal Mamedov was approached by advocate Khalid Bagirov, who reported that the court session would also be held behind closed doors in connection with the testimony of an expert on charges of ethnic hatred. According to Khalid Bagirov's information, in all probability, the next court hearing on next week will be public. After that, about 30 supporters of Hilal Mamedov organized the picket at the side part of the courthouse. The participants of the protest action attached to their clothes the posters with the slogan reading: "Freedom to Hilal Mamedov!", the "Caucasian Knot" correspondent reports.

"We are protesting against holding court sessions behind closed doors and against violations of rights of Hilal Mamedov and his advocates at the trial. Most part of the defence's motions is dismissed. The evidence represented by the advocates is not accepted. And the very criminal case against Hilal Mamedov has been completely fabricated," stated Mekhtibek Safarov, a member of the Committee to protect Hilal Mamedov's rights.

It should be noted that the picket is the fifth protest action to defend Hilal Mamedov for the past two months.

In Azerbaijan, editor-in-chief of "Tolyshi Sado" demands to disqualify judge in his case