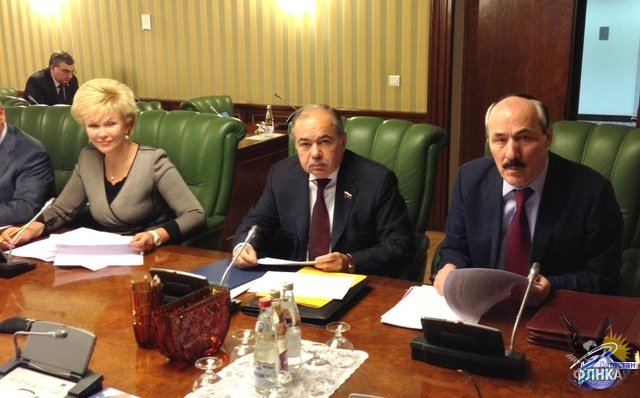 Makhachkala, May 24, 2013. On Thursday, May 23 the first state commission meeting for celebrating the 2000th anniversary of Derbent under the leadership of the Deputy Prime Minister of the Russian Federation - the Presidential Envoy across North Caucasian Federal District Alexander Khloponin has gathered in the Russian Federation Government House, Moscow.

As to the press service of Daghestani Leader, the meeting participants considered the plan for celebratory events. The acting Daghestan President Ramazan Abdulatipov delivered a report.

The discussion was also attended by the Deputy Chairman of the Federation Council Ilyas Umakhanov, the Deputy Minister of Regional Development Vladimir Dedyukhin, the Deputy Finance Minister Leonid Gornin, the mayor of Derbent Imam Yaraliev and the academician Anatoly Derevianko.

The top officials have once again reminded that the celebration of anniversary in 2015 prove the fact that the citadel Naryn-Kala has been identified as the cultural and historical heritage of Daghestanis, architectural and aesthetic value of the unique national heritage of Russia.

The official program of celebration of the 2000th anniversary of Derbent envisages holding educational and publishing activities, forums, exhibitions, festivals, carrying out reconstruction, restoration and repair works in a number of municipal buildings located in the historical the city, as well as landscaping of parks, squares and streets of Derbent.

By results of the discussion A. Khloponin instructed the Finance Ministry and the Ministry of Regional Development RF jointly with the Government RD to finalize an action plan and submit it for approval to the Government of the Russian Federation.