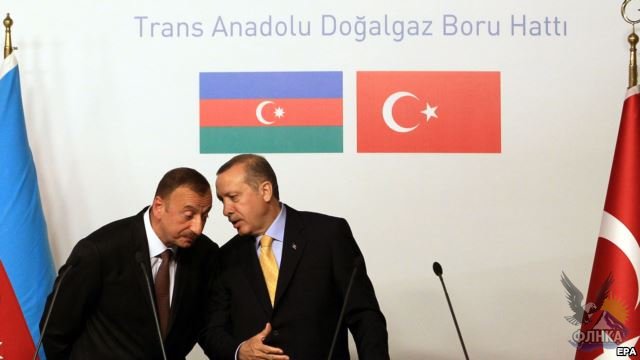 As antigovernment protests continue to roil in Turkey, onlookers in nearby Azerbaijan are watching with a mix of solidarity, envy, and denial.

Part of the interest is familial: Azerbaijan shares strong linguistic and cultural ties with its big-brother neighbor to the west.

But for many Azerbaijanis who have struggled to bring their own nascent protest movement to life in a chilly election-year climate, the Turkish protests have added significance.

"I feel so sorry for Azerbaijan," wrote one young Azerbaijani journalist who is avidly following events in Turkey on Facebook. "Due to our own passive political life, and a society that doesn’t advance, young people are living through the lives of their neighbors."

Many Azerbaijanis have shared photographs that emphasize the passion of the demonstrators, who have turned out in the tens of thousands in a number of cities since Istanbul police cracked down on a peaceful protest on May 31.

Many of the images -- including famous actors joining in the protests and sweeping overhead shots of the massive street demonstrations -- are currently unimaginable in Azerbaijan, where even small protests are routinely broken up and their participants jailed.

But others have focused on the brutality of the Turkish police, who have used tear gas, water cannons, and clubs with little restraint in fighting back the protests in Istanbul, Ankara, Izmir, and elsewhere.

The images of bloodied journalists and police spraying tear gas at point-blank range are certain to be a PR liability for Turkey.

Ankara has sought for years to position itself as a regional power broker straddling the Western and Muslim worlds, despite a rights record that shares many of the same flaws evident in Azerbaijan -- particularly when it comes to political prisoners and the detention of journalists.

Reporters Without Borders this year referred to Turkey as "the world's biggest prison for journalists," with 72 mainly Kurdish media personnel in detention. The same report gave Azerbaijan a scathing review.

COMMENTARY: In Turkey, Tear Gas Instead Of Dialogue

But it is Azerbaijan and its autocratic president, Ilham Aliyev, who have consistently drawn the most criticism for their lockdown government policies, particularly in the wake of protester arrests in Baku and Ismayili earlier this year.

Azerbaijani authorities, who have used tear gas and water cannons to deter their own homegrown protests, have already sought to capitalize on the heavy-handed Turkish protest crackdown as an opportunity to cast their own tactics in a less objectionable light.

Aydin Mirzazade, an Azerbaijani lawmaker, this weekend expressed surprise at the use of violence in self-described democratic countries, and said Azerbaijani society regretted that Turkey had found no better way to communicate with protesters than through "the language of police."

Mirzazade, who also noted the German shutdown of a May 31 anticapitalist protest in Frankfurt, went on to call for equal standards across the board.

"It is unacceptable that the incidents in Azerbaijan become the object of condemnation while they themselves use force in their country in a more severe form," he said.