One More 'Hooligan' Behind Bars In Azerbaijan 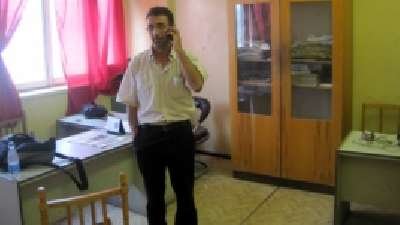 Last month, one more government critic found himself behind bars in Azerbaijan on politically motivated charges of hooliganism.

On June 27, 2013, opposition Musavat party activist Yadigar Sadiqov was arrested at his home in the region of Lankaran. Sadiqov was accused of attacking a man at a teahouse in the town of Masalli two days earlier. Before his arrest, Sadiqov had made public details about the incident in question, saying that it was a setup and he had removed himself from the situation rather than engage with the man who was attempting to provoke him.

Sadiqov is not the first Azerbaijani activist to find himself in such a situation. Over the past six years, hooliganism has been a popular charge for the Azerbaijani authorities to use to imprison critical journalists and activists for political reasons. I have come to think of it as a sort of all-purpose charge to be used against those whom the authorities wish to silence, when they lack the motivation to fabricate a more elaborate case.

Perhaps the best-known hooliganism case in Azerbaijan is that of Emin Milli and Adnan Hajizade, activists and bloggers who served 17 months in jail from 2009 to 2010 on hooliganism charges after they posted a satirical video to YouTube. In the video, a group of young people staged a press conference with a man in a donkey suit, mocking the government's high expenditure for the import of two donkeys from Germany. As Milli has said, there must have been something special about those donkeys to justify the cost of approximately $41,000 each -- so the mock press conference comically explored what that could possibly be.

Someone in the government did not share their sense of humor. On July 8, 2009, Milli and Hajizade were dining at a Baku restaurant with a group of friends when they were confronted and attacked by two men. After the attack, Milli and Hajizade went to the police station to file a complaint and seek medical attention, when they were themselves arrested and charged with hooliganism. They were later convicted and sentenced to 2 1/2 and two years in prison, respectively, but were released early in November 2010 when the remainders of their sentences were converted to conditional sentences.

There are many other examples of the political use of hooliganism charges against critical individuals in Azerbaijan. "Azadliq" newspaper editor in chief Ganimat Zahid was one of the earlier cases. He served nearly 2 1/2 years in jail from 2007 to 2010 after he was the target of a setup. On November 7, 2007, Zahid was walking down the street near his office when a woman he had never met claimed he had insulted her. A man intervened and got into an altercation with Zahid, who was later charged with hooliganism and inflicting minor bodily harm and sentenced to four years in jail. He was released early by presidential pardon in March 2010.

Besides Sadiqov, at least two others are currently in detention or prison on politically motivated hooliganism charges. Ilkin Rustemzade, a Free Youth Organization activist, has been detained since his arrest on May 17, 2013, in connection with a Harlem Shake video filmed in Baku. Freelance journalist Fuad Huseynov is serving a 6 1/2-year sentence following his arrest in October 2010 after he exposed corruption among local officials in the Ujar region.

In addition, opposition Popular Front Party youth activist Dayanat Babayev is currently standing trial on hooliganism charges, facing up to five years in prison if convicted. The charges stem from an altercation between Babayev and a friend of his with another man on the night of November 7, 2012, that appears to be a setup. Babayev was detained on the hooliganism charges immediately after he served a seven-day administrative sentence for participating in a protest in mid-November but released on November 26.

Hooliganism charges have played a role in other politically motivated cases. Araz Guliyev, editor of xeber44.com, is currently serving an eight-year prison sentence on a range of other charges but was originally arrested on hooliganism charges after being accused of disrupting an international folklore festival in September 2012. "Khural" newspaper reporter Aydin Janiyev served 15 months of a three-year jail sentence for hooliganism from September 2011 to December 2012 after being accused of breaking the windows of a mosque in the Lankaran region.

Human rights defender Taleh Khasmammadov served 13 months of a four-year jail sentence from November 2011 to December 2012 for hooliganism after he exposed corruption among local officials in the Ujar region. On August 30, 2012, "Gundam Khabar" newspaper reporter Ilham Suleymanov was convicted of hooliganism and given a six-month conditional sentence after he wrote some critical articles about the mayor of the Saatli region.

Hooliganism charges have also been used as a standing threat of imprisonment in an attempt to silence critical individuals, as is currently the case with photojournalist, blogger, and activist Mehman Huseynov. Since June 2012, Huseynov has faced the threat of imprisonment on hooliganism charges stemming from an altercation with a police officer during a pre-Eurovision protest on May 21, 2012, which Huseynov was covering as a journalist.

Although so far Huseynov has only spent 48 hours in detention, the threat of up to five years of jail time is ever-present, and more than a year later, he still needs permission from the authorities to travel outside the country -- permission which was not granted when he attempted to travel to Norway on June 17, 2013, to accept a prestigious Press Prize from the Fritt Ord Foundation and the ZEIT Foundation. Although Huseynov had submitted the necessary paperwork, he was detained at the airport and later informed that a travel ban had been placed on him.

Of course, hooliganism is not the only charge used by the Azerbaijani authorities to imprison government critics. There are currently more than 80 political prisoners in the country on a range of trumped-up charges, including drug and weapon possession, inciting mass riots, treason, extortion, and other charges.

The real crime in these cases is not hooliganism or any of the other accusations but criticism of the ruling regime. People are serving serious jail time in Azerbaijan for simply disagreeing with the government.

During Milli and Hajizade's trial, many of their friends and supporters gathered outside the courthouse wearing T-shirts that read, "I am also a hooligan." Indeed, according to these criteria, many of us could be labeled the same.

Yadigar Sadygov, accused of hooliganism in Azerbaijan, claims falsification of his criminal case