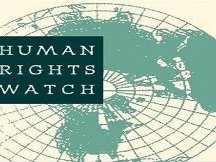 As president of the country that currently holds the six-month rotating chairmanship of the Committee of Ministers of the Council of Europe, Aliyev will address the Parliamentary Assembly on June 24, 2014.

"It’s sheer irony that Azerbaijan presides over a body whose standards it so flagrantly violates,” said Hugh Williamson, Europe and Central Asia director at Human Rights Watch. "The Council of Europe’s leadership should not miss this opportunity to urge Aliyev to free people who are behind bars for nothing more than speaking their minds and to allow independent groups to operate.”

In the past two years, Azerbaijani authorities have brought or threatened unfounded criminal charges against at least 40 political activists, journalists, bloggers, and human rights defenders, most of whom are behind bars. In its September 2013 report "Tightening the Screws: Azerbaijan’s Crackdown on Civil Society and Dissent,” and in dozens of follow-up interviews, Human Rights Watch documented the authorities’ use of a range of criminal charges, including drug and weapons possession, incitement to violence, hooliganism, tax evasion, and even treason to silence its critics.

President Aliyev and his government repeatedly deny the existence of politically motivated prosecutions in Azerbaijan, but the circumstances of the criminal investigations and numerous violations in legal proceedings leave little doubt that the charges against these critics are bogus and intended to punish them for their independent activism and criticism of the authorities, Human Rights Watch said.

Several Council of Europe bodies have expressed concern about politically motivated prosecutions in Azerbaijan. On June 20 Mailis Reps, the Parliamentary Assembly’s rapporteur on human rights defenders, expressed profound concern about "various intimidation measures being taken against human rights defenders, other civic activists, journalists and bloggers [in Azerbaijan] – such as arbitrary arrests, unfair trials on fabricated charges and even the use of torture in custody.”

In May the European Court of Human Rights found that the government had arrested Ilgar Mammadov, one of the country’s top opposition political activists, "to silence or punish [him] for criticizing the Government.”

In a statement on Azerbaijan issued in April 2014, Council of Europe’s Human Rights Commissioner Nils Muiznieks concluded that "[u]njustified and selective criminal prosecution of people expressing dissenting views, including journalists, bloggers and activists, continues unabated. This is unacceptable. All those who are detained because of the views they expressed must be released.”

In January 2013 the Parliamentary Assembly adopted a resolution on Azerbaijan that said, among other things, that "[t]he combination of the restrictive implementation of freedoms with unfair trials and the undue influence of the executive results in the systemic detention of people who may be considered prisoners of conscience.”

"President Aliyev is likely to claim in Strasbourg that no one in Azerbaijan is in prison on politically motivated charges,” Williamson said. "He should be asked to explain why some of the country’s top political activists are behind bars, or why police arrest Facebook activists on drug charges but then question them exclusively about their activism.”

On May 26, in a recent example, a court in Baku found Anar Mammadli, head of the Election Monitoring and Democracy Studies Center guilty of illegal entrepreneurship for operating without registration and other charges, and sentenced him to five and a half years in prison.

"It’s high time for Azerbaijan to show true leadership by fulfilling the obligations it undertook 13 years ago when it joined the Council of Europe,” Williamson said. "Releasing Mammadov and Mammadli, together with dozens of other imprisoned activists, and allowing independent groups to operate unhindered, is the obvious place to start.”