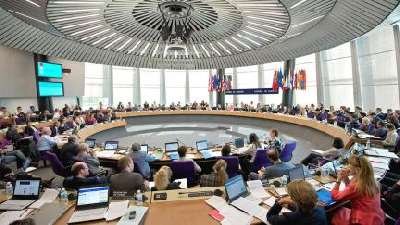 Baku/14.05.14/Turan : From May 14 began six-month presidency of Azerbaijan in the Committee of Ministers. On this occasion, the national flag of Azerbaijan was raised before the Strasbourg City Hall yesterday.

The Deputy Secretary General of the Council of Europe Gabriella Battani -Dragoni hoped that the presidency will be an example in the fight against corruption, and it will continue to contribute to the development of neighborhood and intercultural dialogue.

He noted that during the presidency from May to November 2014, Azerbaijan will have strong support in three basic dimensions of the Council of Europe - human rights, the rule of law and democracy and strengthening the organization's efforts to promote the advancement of these values.

Note that Azerbaijan joined the presidency amid serious problems in the field of human rights and fundamental freedoms.

Human rights organizations estimate 130 political prisoners in the country, where the activity of independent NGOs is limited and there is an actual ban on rallies and pickets.

However, civil society activists expect that in the coming weeks will be taken at least a partial solution to these problems in the light of upcoming visits of PACE rapporteurs and Secretary General of the Council of Europe in late May, meetings of the Bureau and the Standing Committee of the Assembly, as well as OSCE PA session in late June.