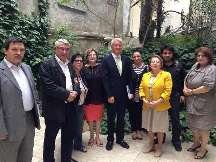 On an official visit to Baku, the Council of Europe Secretary General Thorbjorn Jagland met with a large group of civil society activists on May 20.

Namazov told Turan the meeting lasted for about 2 hours, discussing the human rights situation, the problem of political prisoners, and the implementation of Azerbaijan's commitments to the Council of Europe. In addition, the sides exchanged views on the implementation of the action plan in Azerbaijan during the presidency of the country in the CoE Committee of Ministers.

Namazov said CoE Secretary General received the list of political prisoners, which shall be immediately released.

It is a list of about 30 persons, in turn, Emin Huseynov told Turan. According to this view, the list of all the human rights defenders was unanimous. There are 18 people recognized by Amnesty International as "prisoners of conscience": 8 activists of NIDA, the leader of the REAL Ilgar Mamedov, the deputy chairman of Musavat, Tofig Yagublu, the journalists Avaz Zeinally and Hilal Mamedov, other journalists, bloggers, human rights activists and several religious leaders.

With respect to another 70 political prisoners their cases should be reviewed.

In addition, they noted the need to ensure the rule of law and an independent judiciary. Otherwise, instead of released prisoners there will be new ones.

They also noted the need to eliminate obstacles to the work of NGOs and to freedom of assembly. At the same time, they pointed out that not only rallies are prohibited, but also activities in premises.

Jagland promised to raise these issues before the Azerbaijani leadership.

On the eve of his visit to Baku, the Council of Europe issued a statement that Jagland announced a plan of action regarding Azerbaijan, covering, inter alia, issues of freedom of expression and independence of the court in which the CE expects progress.

Furthermore, Jagland is going to ask the government of Azerbaijan to release Ilgar Mamedov, Director of the CE funded Baku School of Political Studies.

"I really hope that this will be a good opportunity for Azerbaijan to demonstrate its intention to cooperate and comply with the standards of the Council of Europe," said Jagland .