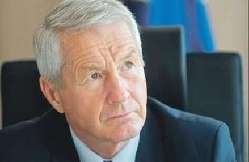 The Secretary General of the Council of Europe, Thorbjørn Jagland, today informed the Committee of Ministers of his decision to withdraw the Council’s participation in the joint working group on human rights issues in Azerbaijan.

Since October 2014, a Council of Europe representative had been attending meetings in Baku intended to revive the dialogue between civil society and Azerbaijani authorities. Despite this initiative, the overall situation of human rights defenders in the country has deteriorated dramatically. An increasing number of human right defenders has recently been imprisoned, and the Council of Europe has received worrying reports about unacceptable detention conditions.

Prior to his intervention at the Committee of Ministers, the Secretary General had informed Azerbaijan’s President Ilham Aliyev of his decision.

*Recall that in October 2014 a group of civil society activists appealed to the Secretary General of the Council of Europe, Thorbjorn Jagland, the head of the PACE Anne Brasseur and to the Member States to take decisive action due to the deteriorating human rights situation in Azerbaijan.

The petition, signed by 35 activists, noted that a working group could consist mainly of government officials, members of Parliament, and representatives of the pro-government NGOs. The group meeting on October 22 ignored calls to take urgent measures to protect human rights in Azerbaijan. It was mentioned that the Working Group was re-established at the initiative of Jagland to organize a dialogue between the Azerbaijani government and civil society.

However, the procedure for appointing members of the group and membership criteria were not disclosed to the public, and leading figures  dealing with political prisoners have been left out of this group. At the same time, the group included two MPs, Samed  Seyidov and Ali Huseynli, openly denies the existence of political prisoners in the country, and accused the arrested human rights activists, that speaks to their bias.

Absence of independent voices and persons in the group, knowing about the real situation of human rights, questioned the purpose of the group.  According to an informal survey conducted among political prisoners, 90% of the members of the Working Group were considered biased people.

Over 10 political prisoners - Ilgar Mammadov, Tofig Yagublu, Leyla Yunus, Intigam Aliyev, members of the NIDA Movement signed the statement of no confidence in the members of the pro-government NGOs represented in the group.

The authors also pointed out  non-admission to participate in the trial  in the case of  the journalist Khadija Ismailova, despite the invitation to the meeting. The petition also states that the Secretary of the Working Group was appointed Sahib Mammadov, head of the League for the Protection of labor rights, who in September at a conference in Warsaw, ODIHR OBCHE accused NGOs of "money laundering and lack of transparency." He also justified the repression of the authorities against civil society.

The real purpose of the Working Group is leveling  the role of  PACE rapporteur on political prisoners, and inclusion in his report, under the guise of independent voices, the government's position.

All this indicates the absence of the authorities’ intention to start a real dialogue with civil society.