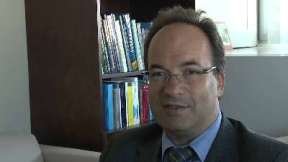 According to official information, Hessel noted "special urgency"  of the issues  discussed by the working group, and declared its readiness to provide full support to the Council of Europe working group.

In turn, co-chairman of the working group,  head of the department of the Presidential Administration Fuad Alasgarov said on cooperation with the Commission of Pardons. As a result of this cooperation, over  six months the President of Azerbaijan has pardoned 15 people, he said.

Member of the working group, the head of the Azerbaijan National Committee of the Helsinki Citizens' Assembly Arzu Abdullayeva told Turan, that during the meeting  they focused on questions  of the release of political prisoners. Human rights activists once again  brought up the the issue of release of activists of NIDA, Ilgar Mammadov, Intigam Aliyev, Hilal Mamedov and other political prisoners. According to Abdullayev, the authorities said that by the end of May may be issued a new order for clemency.

* Joint Working Group on Human Rights in Azerbaijan with the participation of representatives of government and civil society has been recreated on the initiative of the Council of Europe Secretary General Jagland in October 2014 to assist in solving the problem of political prisoners in Azerbaijan.