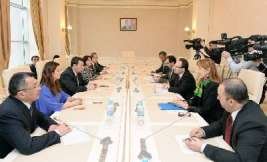 Group of Rapporteurs on Democracy of the Committee of Ministers of the Council of Europe arrived in Baku and held a meeting with the Azerbaijani delegation to PACE. During the meeting in the Parliament the  head of the Azerbaijani delegation Samad Seyidov convinced  the visitors that in Azerbaijan there is a rapid development, stability, and the country is on the right way. He also said that Azerbaijan "sensitively and time" responds to all questions posed by the Council of Europe, trying to fulfill them, and seeks to raise bilateral relations to a higher level.

The delegation also held a meeting at the Ministry of Justice, where they discussed issues related to the implementation of the Action Plan between the CE and Azerbaijan on the 2014-2016.

* This plan was signed in May 2014 during a visit to Baku Secretary General Thorbjørn Jagland, and it coincided with the beginning 6-month chairmanship of Azerbaijan in the CoE Committee of Ministers. However, not any real steps were made to  implement the plan  despite the fact that almost a year has passed.

Moreover,  in Azerbaijan  NGOs and activists lobbied for cooperation with European structures are subjected to harassment.

At the same time, cooperation between government agencies and the Council of Europe bodies has been minimized, and the official Baku  openly ignores the decisions of the European Court of Human Rights, and calls for the CE Secretary General and PACE President to release known activists, in particular the leader of the movement REAL, Ilgar Mamedov.