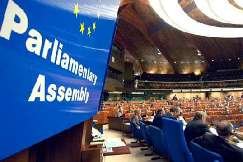 As part of the PACE session in Strasbourg on June 23 civil society activists in Azerbaijan organized alternative hearings on the human rights situation in the country.

As the director of the Institute for Reporters' Freedom and Safety (IRFS) Emin Huseynov told Turan, during the hearing were discussed issues related to the violation of freedom of expression, assembly and association in Azerbaijan and the problem of political prisoners.

At the hearing on the situation in Azerbaijan with freedom of expression, assembly and association, and the pursuit of youth activists were Director of Media Rights Institute Rashid Hajili, the head of the Legal Education Society Intigam Aliyev, the head of the Society of Legal Protection and Education Rasul Jafarov and the Board member of the movement NIDA Aygun Panjaliyeva.

The speakers answered questions from the audience. Some deputies participating in these hearings then asked questions about the human rights issues Azerbaijani Foreign Minister Elmar Mammadyarov, speaking at the PACE session as chairman of the Committee of Ministers of the Council of Europe.

Mammadyarov evaded direct answers and generally said that Azerbaijan is on the path of democracy and eventually existing problems will be solved.

On Monday, a group of Azerbaijani political refugees in Europe also held a protest outside the headquarters of the Council of Europe, demanding condemnation of human rights violations in Azerbaijan.

An important result Huseynov called PACE PACE Bureau approved the draft document on the proposal for a resolution on political prisoners in Azerbaijan.

Huseynov particularly noted the importance of transferring the consideration of the topic of political prisoners in Azerbaijan and the appointment of a new speaker in the Committee on Legal Affairs and Human Rights.

If the question was submitted to the Monitoring Committee, it would have been considered by the already existing speakers in general to respond to obligations and commitments by Azerbaijan, Pedro Agramunt and Joseph Gresh, known for their conformist stance.