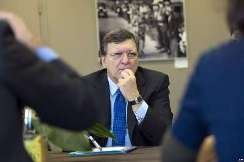 During his visit to Baku, European Commission President Jose Manuel Barroso on June 14 met in the office of the EU with a large group of the representatives of civil society in Azerbaijan.

According to the meeting member , the Director of the Institute for Peace and Democracy (IPD) Leyla Yunus, she informed Barroso about strengthening repression against opponents of the government recently in Azerbaijan, and that in this connection, the Repression Resistance Center (RRC) under the IPD was created. She passed Barroso the first appeal of the CSR.

"The events in Ukraine, which riveted the attention of the USA and the EU, has given the authoritarian regime by Aliyev an opportunity to start the complete destruction of remaining independent media, NGOs, civil society activists in Azerbaijan," reads the appeal. The appeal also reads that there are 130 victims of political repression in Azerbaijan, 40 of them "prisoners of conscience" and 90 political prisoners.

In particular, among the "prisoners of conscience" there are 11 journalists and bloggers, four human rights defenders, 11 young activists, the vast majority were educated in the USA and the EU, two leaders of pro-Western opposition, and 12 believers.

The RRS demands: the immediate release of all the victims of political repression of the authoritarian regime by Aliyev, criminal responsibility of all employees of the Prosecutor's Office, Ministry of Internal Affairs, Ministry of National Security, who participated in the torture and fabrication of criminal cases, as well as the expulsion of the judiciary judges who passed politically motivated sentences.

Another participant in the meeting, the director of the Institute for Reporters Freedom and Safety (IRFS) Emin Huseynov noted that he raised issues of restricting fundamental freedoms, including freedom of expression, press, assembly and association.

He said that Barroso’s attention was also focused on a pressure on the institutions of civil society, the problem of refusal of registration of NGOs, grant agreements of registered NGOs, unreasonable administrative inspections of NGOs, etc.

According to Huseynov, he informed Barroso of the above problems in a special message to him on the eve of his visit.

Emin Huseynov said that Barroso listened attentively, and said that the EU's relations with Azerbaijan are not limited to the energy sector, and the EU structures will closely monitor the situation of democracy and human rights.

He promised to raise issues of concern from civil society activists at another meeting with President Ilham Aliyev, to be held on Saturday evening.

By common agreement the meeting participants were able to report to the media only about their participation.