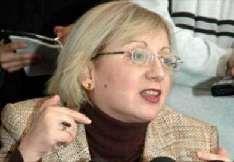 At a press conference today Director of the Institute for Peace and Democracy (IPD) Leyla Yunus announced the strategy and tactics of the Centre to Resist Repression (CRR) to boycott European Games in Baku in the summer of 2015.

The main principles of the Olympic Movement are peace, equality, humanism, humanity, human rights, tolerance, said Yunus. In this sense, it is inadmissible to hold games in authoritarian Azerbaijan, where human rights are violated.

"Of course, there is not red or brown dictatorship in Azerbaijan. However, an authoritarian regime in Azerbaijan completely violates human rights," said Yunus. With regard to strategy and tactics, the CRR appealed to the European Olympic Committee (EOC) and the EOC representative office in the EU to cancel the decision to hold the Games in Baku.

Further, six working groups of the CRR, in which members of the opposition parties, youth activists and bloggers are involved, will send an appeal and will work with the Olympic Committees of Europe, famous athletes, international NGOs, NGOs in Russia, Ukraine and Belarus, the European media.

Materials on human rights violations in Azerbaijan in the light of the upcoming games have already been published in the British and German press.

Yunus also said she expects provocation by the authorities, but she will not retreat.

How realistic is to achieve the boycott of games? Answering this question, Yunus said that who believes in victory, wins. Authorities lay great hopes on the Games, and this factor must be used to achieve a solution to many problems. The CRR will regularly inform of the results of the work.

Yunus also reminded that earlier CRR announced the list of judges who persistently violate human rights, with an appeal to apply sanctions against them, similar to the law of "Magnitsky".

The USA and Europe have already started some work in this direction, and these six judges will soon fall under the visa sanctions, the same will be applied against the investigators of the Prosecutor Office, Yunus is sure.