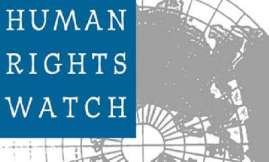 The human rights organization Human Rights Watch called on international partners to insist on the release of the illegally arrested and detained government critics in Azerbaijan before the European Games.

"Before the European Games there is is less than two months, but a terrible human rights situation and the politically motivated prosecution of government critics does not change," said the director of HRW for Europe and Asia Jane Buchanan.

"Partners in Azerbaijan, including the European Union, should urge the Azerbaijani authorities to release the arrested critics of the government and to stop the pressure on them.

European leaders must make it clear that otherwise they will not send high-level delegations to the opening of the Games," the statement says.

EOC must stand up for the principles of the Olympic movement and make it clear that the government of Azerbaijan rejecting the fundamental values cannot be the owner of the prestigious international sporting event, the statement said.