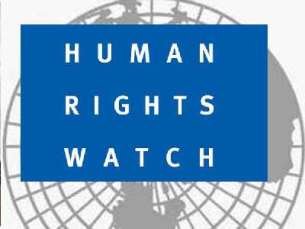 The international human rights organization Human Rights Watch 100 days before the start of the European Games demanded the release of arrested civil society activists and journalists in Azerbaijan.

"Attacks of the government on journalists, human rights defenders and activists are a challenge to the spirit and letter of the principles of the Olympic Charter on press freedom and human dignity," said the Director of HRW for Europe and Central Asia Jane Buchanan.

Human Rights Watch called on European leaders to warn Baku that in case of not releasing the arrested opposition leaders, they would not send high-level delegations to the Games.

"Olympic committees and national committees of the European countries should make it clear to Baku that it mocks the Olympic ideal and it must release prisoner activists and journalists and remove the severe restrictions on the media and freedom of speech," the statement reads.

The organization also distributed a slideshow history of arrests of human rights activists and journalists in Azerbaijan in recent years.