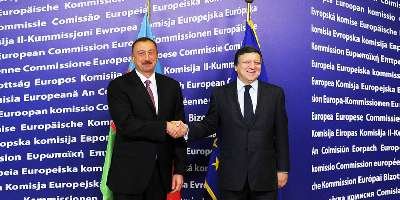 “We in Europe are also not perfect,” José Manuel Barroso said last week while hosting a joint press conference in Brussels with Azerbaijan’s head of state, Ilham Aliyev. The president of the European Commission, who is supposed to defend the EU’s democratic values, seemed to prove his own point by deciding not to openly question his guest’s rosy picture of Azerbaijan’s human rights record.

“Ensuring human rights and fundamental freedoms stands high in our agenda,” said Barroso. In fact, standing at paragraph 11 out of 15, these rights were raised rather low in the statement Barroso issued after his meeting with Aliyev. Although briefly referring to “shared values,” the text was dominated by energy issues, and, specifically, the Southern Gas Corridor—a European Commission project that would help diversify Europe’s gas supply by adding the Caspian and Middle Eastern regions as sources.

If Azerbaijan does not have democracy, it has oil and gas, which is a very convincing argument for a European Union eager to work with energy suppliers other than Russia. “We have more than 2 trillion cubic meters of proven reserves,” Aliyev said. “This will change the energy map of Europe.” In a move seen as a way to court the favors of the country’s rulers who aspire for international recognition and prestige, the European Commission proposed last May the draft of a Strategic Modernization Partnership with Azerbaijan.

The European Union is not the only European institution eager to give an easy ride to Azerbaijan. Last year the Eurovision song festival was held in Baku although the repression of media freedom violated all of the proclaimed lofty principles of the organizer, the Geneva-based European Broadcasting Union (EBU). And next year the Council of Europe, whose official mandate is to defend democracy and human rights, will offer its rotating chairmanship to Azerbaijan.

This soft spot for Baku is contradicted by these institutions’ own assessments of the human rights situation in Azerbaijan. According to the news website EUObserver, the EU Enlargement Commissioner Stefan Fule was hardly euphoric. In a letter addressed to German Christian Democratic MEP Elmar Bork, chairman of the European Parliament Foreign Affairs Committee, he noted that “there is an overall worsening of human rights in the run-up to elections.” According to EUObserver’s Andrew Rettman, “Fule noted that unlike Armenia or Georgia, Azerbaijan does not care about EU integration because ‘it is self-confident due to its energy reserves.’”

The latest news from Baku does not bode well if the European Union pretends, in Barroso’s words, to “move to a long-term association grounded in democracy and shared values.”

Most recently, on June 20, the U.S. government-funded broadcaster Radio Free Europe/ Radio Liberty reported interference with its signal to Azerbaijan “that could indicate a new level of deliberate interference, a practice known as jamming, and a violation of international telecommunications regulations.”

CPJ has documented systematic and longstanding attacks on press freedom in Azerbaijan, that, at best, have remained unaddressed and, at worst, have been initiated or condoned by the state.

Azerbaijan is one of the leading jailers of journalists in Europe and Central Asia; at least seven critics of Aliyev’s regime are languishing in Azeri prisons. Murders of at least two independent reporters remain unsolved. Authorities arbitrarily bar reporters from leaving the country, and subject them to intimidation and politically motivated retaliatory prosecution, CPJ researchshows. The EU’s own attempts to persuade Azerbaijani authorities to decriminalize defamation and insult have brought no results. Instead, prior to his meeting with Barroso, Aliyev signed into law a bill that extended criminal defamation to Internet speech.

Why FLNCA didn’t get to Tbilisi