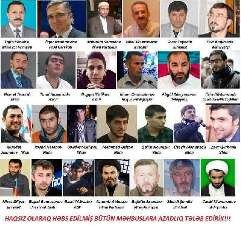 Defenders of Azerbaijan do not agree with the statement of President Ilham Aliyev about the lack of political prisoners.
They are also surprised at Aliyev saying that there is no definition of the term, "political prisoner".

The head of the Club of Human Rights (CHR) Rasul Jafarov told Turan that after the visit of the PACE rapporteurs, Christoph Strasser, to Azerbaijan, arguing that there is no concept of "political prisoner" was prevented by Azerbaijani authorities. Strasser, on behalf of PACE, prepared a report. On the basis of this report, dated October 3, 2012, PACE adopted Resolution 1900 entitled, "Understanding the Political Prisoner."

It identified criteria for the concept of the "political prisoner":

"A person deprived of his or her personal liberty is to be regarded as a 'political prisoner':

a. if the detention has been imposed in violation of one of the fundamental guarantees set out in the European Convention on Human Rights and its Protocols (ECHR), in particular freedom of thought, conscience and religion, freedom of expression and information, freedom of assembly and association;

b. if the detention has been imposed for purely political reasons without connection to any offence;

c. if, for political motives, the length of the detention or its conditions are clearly out of proportion to the offence the person has been found guilty of or is suspected of;

d. if, for political motives, he or she is detained in a discriminatory manner as compared to other persons; or,

e. if the detention is the result of proceedings which were clearly unfair and this appears to be connected with political motives of the authorities. "(SG / Inf (2001) 34, paragraph 10).

Jafarov said that using these criteria the CHR, the Institute for Peace and Democracy (IPD) and the International Society of Legal Studies, at the beginning of October 2013, prepared a list of political prisoners in Azerbaijan, which totaled 142 people.

However, the list is constantly changing: some were pardoned, some went out on parole, and so on. At the same time, new political prisoners appeared - a civil rights activist Anar Abilov and a blogger Abdul Abilov.

"With this in mind, the political prisoners in the country are more than a hundred people," said Jafarov.

On the other hand, said Jafarov, if the Azerbaijani authorities are to appeal decisions of the Assembly and consider PACE a reputable organization, you must respect its other resolutions that contain requirements to solve the problems of human rights and political prisoners.

Human rights groups will visit the PACE winter session (January 27-31) in order to attract the attention of those problems with the human rights and political prisoners in Azerbaijan.

"We say that after PACE rejected, in January 2013, the Strasser report on political prisoners in Azerbaijan there appeared no less than 30 new political prisoners. Therefore, the Council of Europe should seriously address this problem. Especially since Azerbaijan takes the chairmanship of the CoE Committee of Ministers in May this year," said Jafarov.

The Head of the Public Alliance "Azerbaijan without Political Prisoners" Elshan Hasanov also noted that in 2013 in Azerbaijan for political reasons, were arrested 33 journalists, bloggers, youth activists and opposition party members.

According to him, the cause of politically motivated arrests is the fear of people's dissatisfaction with government corruption, bribery and bureaucratic arbitrariness.

"If the authorities do not release political prisoners, we will call upon the international community to boycott the European Olympic Games in Baku," Hasanov said to the agency Turan.