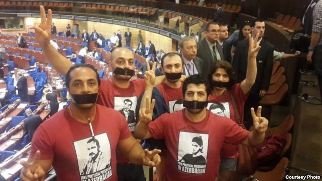 Azerbaijani President Ilham Aliyev's speech at a session of the Council of Europe's Parliamentary Assembly (PACE) in Strasbourg has been met by protests.

Azerbaijani activists living in Europe came to the PACE parliamentary session on June 24 wearing T-shirts with pictures of political prisoners in Azerbaijan and had their mouths covered with black tape.

They protested Aliyev's statement at the session that "all fundamental freedoms are respected in Azerbaijan."

Aliyev stated at the session that reforms in Azerbaijan "allow Azerbaijani citizens to practice any political activities" and called on EU officials to "avoid double standards."

On June 23, Human Rights Watch called on the Council of Europe and PACE to urge Aliyev to end his country’s persecution of government critics and journalists.