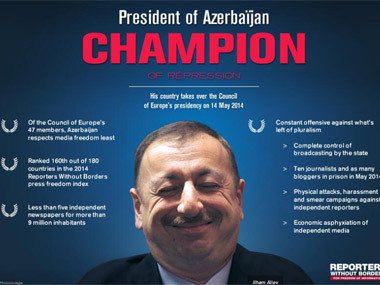 Azerbaijan assumes chairmanship of Council of Europe Committee of Ministers with the worst results on press freedom among 47 member countries, international organization "Reporters Without Borders" writes in defense of the press in his microblog on Twitter.

The organization also notes that Azerbaijan ranks 160 among 180 countries in "Reporters without Borders" Press Freedom Index 2014. The country has less than five independent newspapers, the government has full control over the media. At the moment, 10 journalists and bloggers are arrested in Azerbaijan. Independent journalists are being harassed and discredited.

Azerbaijan at Bottom of Index of Freedom