Azerbaijan at Bottom of Index of Freedom 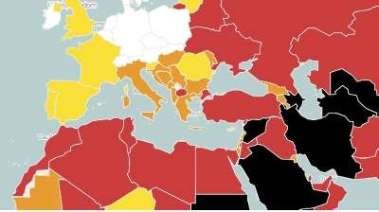 The organization Reporters without Borders published its annual index level of press freedom in the world.

"In the Caucasus, Azerbaijan (162nd, down 2) suffered an unprecedented crackdown on critics and registered the biggest fall in score among the index's 25 lowest-ranking countries. With media freedom already limited by one-sided regulation and control of the advertising market, the few remaining independent publications were either collapsing under the impact of astronomic damages awards or were simply closed by the police. The number of journalists and bloggers who were jailed turned Azerbaijan into Europe's biggest prison for news providers, "the report says.

It should be noted that Azerbaijan is adjacent to the list of Rwanda, Saudi Arabia, Uzbekistan, Turkmenistan, Cuba, North Korea and the biggest violator of freedom, Eritrea.

It is noteworthy that countries such as Iraq, Pakistan, Libya, Ethiopia, Afghanistan and Cambodia are ahead of Azerbaijan.

Neighbors of Azerbaijan in the region, Armenia and Georgia took places 78 and 69 respectively.