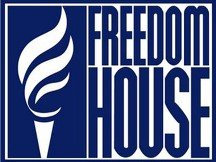 Azerbaijan has worsened its index in the sphere of democracy and is still ruled by an authoritarian regime reads the new report on Nations in Transit 2014 written by the international organization Freedom House.

Freedom House has analyzed the democracy progress in 29 countries in Central Europe and Eurasia, 13 of which were called democratic, 6 - transition countries and 10 - authoritarian. Democracy degree is measured at 7-point scale, where 1 is the highest point and 7 - the lowest.

According to the article Armenia over the past year has not recorded changes in the field of democracy and is ranked among the transition countries. Georgia has made progress in the area of media freedom and has improved the electoral processes. Except Armenia, Moldova and Kyrgyzstan the other CIS countries are classified as authoritarian states.

It is noteworthy that the electoral process in Azerbaijan received the least point - 7 points. All other areas - freedom of media, the justice system, corruption, etc. received not more than 6.5 points.

"Azerbaijan is ruled by an authoritarian regime characterized by intolerance for dissent and disregard for civil liberties and political rights,” the document reads.

It is noted that the presidential elections held in October 2013, have become known for their serious irregularities.

"In a year were held series of protests in the capital and in the regions. Some of these demonstrations were organized by the opposition; others appeared spontaneous, most notably the riots in the town of Ismayilli at the end of January and rallies in Baku protesting violence in the military in March. Throughout the year, the regime arrested and detained political opponents, activists, and journalists and used bogus charges against its critics,” the report reads.

On the eve of elections the government had increased pressure over the independent media. In late 2013 two opposition newspapers, "Azadlig" and "Musavat", faced the threat of closure due to excessively large fines.

"The state’s control over oil resources and the oligarchic structure of the economy contribute to widespread corruption in Azerbaijan,” the Freedom House concludes.