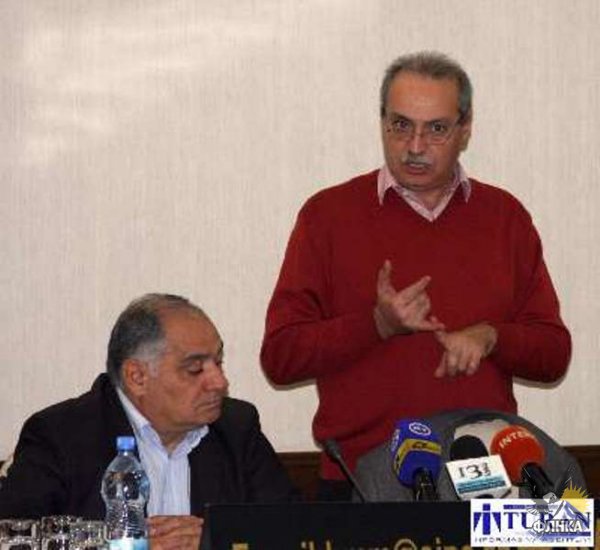 Quarterly report for the project "Freedom of speech in the Eastern Partnership Countries" presented on Wednesday at the International Press Center journalistic association "Yeni Nesil" ("New Generation.") Head of the Association, Arif Aliyev, said that the project is supported by the European Union in Azerbaijan, Belarus, Armenia, Georgia, Ukraine and Moldova.
In the frameworks of the project are prepared indexes of media freedom, which are updated quarterly, and are then presented to the local community and international organizations. The present report covers the period from July to September. The monitoring covers TV, radio, the Internet and new media.

In politics, the lowest index is 1 (0-40 points), the highest - 7 (200-240 points.) Political unit consists of eight criteria: availability of guarantees of freedom of the press in the Constitution and laws, censorship and self-censorship , etc. In this area, the situation is estimated at 123 points, which corresponds to the index 4 . Lowest score in this area due to the absence of the defamation law, introduced last year, limiting changes in legislation related to the media.

The practical block consists of 37 criteria: the death of journalists , physical injury , freedom of media , litigation , the economic situation, and so on. In this unit, the lowest index is 1 (0-170 points), the highest is 7 (930-1100 points). The situation in this area is estimated by experts at 323 points (index 3). Experts also point out that in 2013 there were many journalists subjected to criminal prosecution.

The situation in the broadcasting was evaluated on five criteria : the independence of TV channels, the time allotted for expressing alternative positions , the concept of the transition to digital broadcasting, the role of the regulatory authorities. In this area code 1 ( 0-20 points ) is the lowest index in the assessment of media freedom . The highest index is 7 ( 130-150 points). Here Azerbaijan scored 43 points (index 2).

The reason for such a low index is the absence of independence of the channels , pluralism in the air, the role of regulatory bodies implementing political functions.

The block Internet and new media is evaluated according to five criteria: legislation restricting internet freedom , the presence of regulators , harassment of bloggers and active Internet users, and more. Azerbaijan in this field received 52 points (index 3.)

Thus, Azerbaijan is among the six countries , gaining a total of 546 points, and ranked the last, ahead only of Belarus.

To improve the situation in Azerbaijan, proposals have been made - to adopt a law on defamation, repeal the reactionary changes to the laws on the media , to stop the persecution of journalists, to ensure the independence of channels , etc.