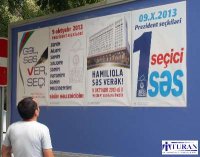 Despite the fact that the presidential election in Azerbaijan is only one month away, there is little atmosphere to the campaign.

There is virtually no noticeable street agitation. A few faded posters advising that voting day is October 9, and on the fundamental rights of voters are lost against the background of large advertising billboards.

Blitz surveys conducted by Turan reporters on the streets of Baku showed that many residents of the capital do not even know the date of the voting and some believe that the election will be held in November.

TV channels of the country also have no interest in the topic of the election. It is curious that no TV channel has expressed a desire to advertise presidential candidates on a commercial basis, in connection with the start of the campaign on 16 September. Political advertising will be conducted only on Public Television.

Analysis of TV programming has once again shown that they are all under the control of the Aliyev administration. Therefore, a "voluntary" waiver of the TV channels from merchantability, surveys, talk shows, debates and others are evidence of lack of interest of the authorities in formation of a competitive campaign.

This is confirmed by the statement of the ruling party functionaries that Ilham Aliyev, who has been on TV screens as a "discoverer" of new facilities, will not conduct an election campaign. This deprives the campaign of intrigue and political debate.

CEC declined to comment on the relatively poor education of the electorate. In turn, a well-known expert on elections, the head of the Center for Monitoring Elections and Democracy Training, Anar Mammadov said that the socio-political situation in the country is not conducive to holding free and fair elections. "First of all, seriously limited are political freedoms, especially freedom of expression and assembly," said Mammadov.

Recall that the election year began with a large number of politically motivated arrests. This political background undermines public confidence in the electoral process and the prospects for a peaceful change of power. World experience shows the dangerous consequences to which similar trends could lead, he said.

According to Mammadov, during the parliamentary elections of 2005, the pre-election situation in the country, despite its flaws, was much better than now.

"Then there were relatively equal opportunities for political competition. Nowadays, the alternative political forces are left only a small window. The regime established 20 years ago created a mechanism for total political oversight. Prior to the elections, the opportunities for civil society institutions, media and political groups are kept to a minimum," he said.

Mammadov also pointed to the deterioration of electoral law. The 2005 election campaign lasted 120 days, but now the campaign period is reduced to 60 days. But the authorities are trying to turn even these 60 days into an uninteresting process.

On the lower level there is the issue of education. "The most effective way to educate voters is electronic media, but private television stations refrain from showing even educational videos," said Mammadov.

Posters of CEC are still prepared in the Soviet tradition. There are not tenders for the best creative campaign for materials using advanced technologies.

Another problem is low confidence in the CEC, which makes the messages of the campaign ineffective.

However, the expert noted with satisfaction that in recent years social media have been used by the active population for the alternative media. Polls show that people that have turned to Internet TV channels, which have become sources of unnecessary and uninteresting information.

Mammadov said that the increase in voter participation is possible if the presidential candidates lead an active campaign.

As for promoting democratic elections by the Western states and international organizations, the expert is not satisfied with their position.

"Unfortunately, attention and political support for the electoral process by the EU and the U.S. has significantly weakened. Democratic countries are poorly responsive to violations of human rights in Azerbaijan and now they show the same attitude to the election. This approach adversely affects the credibility of such institutions as the Council of Europe, OSCE, etc.," said Mammadov.

However, we must distinguish the responsibility of governments from the position of the institutions of civil society. "If it were not for NGOs, media and some politicians of democracy, the situation we are witnessing today would be even more shameful because the West would even more sacrifice human rights for the sake of geopolitical and energy interests," he said.