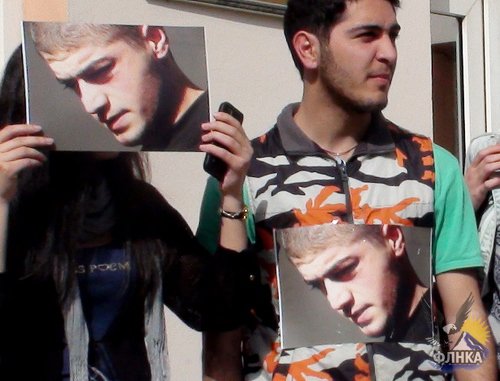 Fariz Namazly, the advocate of Mamed Azizov, an activist of the civil movement "Nida", kept in prison in Azerbaijan, has filed a complaint with the European Court of Human Rights (ECtHR) asking to investigate his client's torture. The lawyer believes that Article 3 (prohibition of torture) of the European Convention on Human Rights (ECHR) was violated in respect of Azizov.

Let us remind you that Mamed Azizov is one of the eight "Nida" activists, accused of organizing mass riots. He has twice beaten up and tortured by law enforcers of Azerbaijan, said the lawyer.

First it happened January 11, 2013. Then, he and another activist Bakhtiyar Guliev, was detained while distributing leaflets inviting citizens to a rally on January 12 against soldiers' deaths. The second case, according to Namazly, occurred after Azizov's arrest at the SIZO (pre-trial prison) of the Ministry of National Security (MNS) on March 15, 2013.

The lawyer said that his client was threatened with rape. Fariz Namazly lodged a complaint to the prosecutor's office. However, on June 4, 2013, the General Prosecutor's Office of Azerbaijan refused to open a criminal investigation into the facts of torture.

Earlier, the PR Centre of the MNS denied the allegations of the "Nida" activists on application of torture and psychological pressure to them.