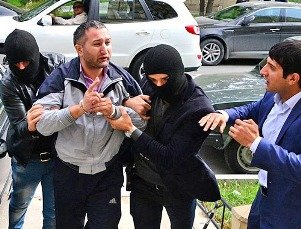 Parviz Gashimli, a journalist and a human rights defender, kept at the SIZO (pre-trial prison) of the Ministry of National Security (MNS) of Azerbaijan, has filed a complaint against the court's decision to reject his request to transfer him to the SIZO of the penitentiary service. The consideration of the complaint is scheduled for December 23, said his advocate.
Let us remind you that the complaint was motivated by the fact that the MNS is conducting the investigation and, therefore, is an interested party, while keeping the defendant at its SIZO is used to put pressure on him. On December 13, the court dismissed the initial complaint.

Elchin Sadygov, Parviz Gashimli's advocate, told the "Caucasian Knot" correspondent, that on December 13, after return of his client from the Sabail Court, the journalist was put into the dungeon.

According to the advocate, Parviz Gashimli believes that the SIZO personnel took revenge on him for his complaint to the court about the torture.

Let us remind you that on December 13, when Parviz Gashimli was brought to the court, he managed to shout out to his relatives and colleagues, who were waiting for him in the street, that he had been tortured.

On December 18, Parviz Gashimli was visited at the SIZO of the MNS by Elchin Bekhbudov, the head of the Committee against Torture, and his assistant Elchin Shirinov. They visited the defendant to investigate his complaints about torture.

"I asked Parviz several times about torture. I told him that if he had any problems, let him tell about them. However, Parviz said that he had filed his complaint to the court and that he wouldn't add anything. Meanwhile, the SIZO bosses deny any facts of torture," Elchin Bekhbudov told the "Caucasian Knot" correspondent.