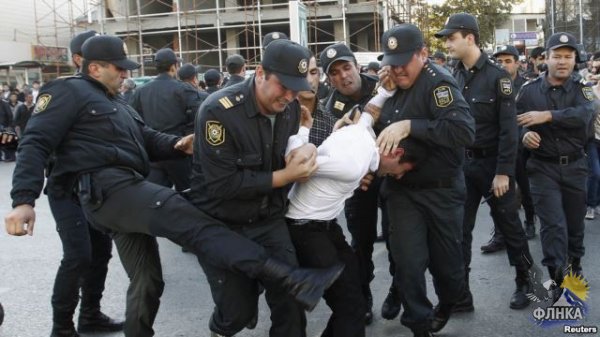 WASHINGTON -- The United States should hold Azerbaijan accountable for its human rights record, even as the energy-rich country has come into renewed focus as a potential key player in weaning Europe off of Russian gas in the wake of the Ukraine crisis, U.S. officials say.

"I feel strongly that as we work closely with Azerbaijan on energy issues, we must also engage them just as forcefully on the declining human rights situation as part of our overall concern for energy security in the region,” U.S. Senator Ben Cardin, a Maryland Democrat, said in a statement to RFE/RL.

Since the Kremlin’s annexation of Ukraine’s Crimea territory in March, Western leaders have spoken of the need to mitigate Russia’s geopolitical leverage by reducing Europe’s dependence on Russian gas pumped to EU members through Ukraine.

Senior EU and U.S. officials -- including U.S. Secretary of State John Kerry -- have publicly noted the critical role Azerbaijan could play in this strategy thanks to the Southern Gas Corridor, a planned network beginning near Baku and stretching through Turkey that could bypass Russia and send Caspian gas into southern Europe.

Azerbaijan, meanwhile, has been promoting itself in Washington as an important player in ensuring European energy security, hosting events catering to U.S. policymakers.

These efforts, however, are coinciding with what activists and analysts say are deteriorating freedoms in Azerbaijan. This trend, they say, is underscored by the recent detention of two prominent human rights activists, as well as the arrest of a journalist who was charged with treason after arriving in Baku from Turkey.

Thomas De Waal, a South Caucasus expert with the Carnegie Center, wrote this week that one theory behind a perceived crackdown on critics of Azerbaijani President Ilham Aliyev is that "the Baku government has come to believe that Azerbaijan is an indispensable energy supplier and therefore immune to Western criticism.”

Richard Morningstar, the current U.S. ambassador to Baku, did not shy away from a discussion about democracy and human rights in Azerbaijan at an event in Washington this week, calling the issues the "elephant in the room” in the bilateral relationship.

"We can’t wish these issues away. We seem to talk past each other, and we are who we are, and we do hold strong democratic values, and when we see what we think are abuses or problems, we speak out, and we’ll continue to speak out,” Morningstar said at the April 30 event organized by the Houston-based Assembly of the Friends of Azerbaijan.

The group is funded by the State Oil Corporation of the Azerbaijan Republic (SOCAR) and recently signed a two-month contract worth more than $46,000 with the Washington-based PR firm APCO Worldwide to bolster Azerbaijan’s image, according to a Foreign Agent Registration Act filing.

U.S. Representative Charlie Dent, a Republican from Pennsylvania, did not address human rights in his keynote speech touting U.S.-Azerbaijani ties, though he told RFE/RL that nothing prevents the United States from pressing Baku on the issue.

"Well sure, we can speak up, absolutely. Nothing would prevent the United States from speaking up when we see any type of behavior that we would find objectionable,” he said.

Sponsors of the event, which was held in an ornate hotel ballroom near the White House, included energy giants BP and ConocoPhillips. Top U.S. lawmakers from both parties also spoke at the event, including House Democratic leader Nancy Pelosi, Republican Senator Kelly Ayotte, House Democratic caucus chairman Xavier Becerra, and Republican Representative Ileana Ros-Lehtinen.
The event came on the heels of an April 11 briefing on Capitol Hill titled "European Energy Security in Light of the Ukraine Crisis,” which included Congressional staffers and foreign diplomats in the audience. The briefing included a presentation by Rauf Mammadov, who represents SOCAR in the United States.

U.S. Representative Michael Turner, an Ohio Republican whose office assisted in organizing the briefing, has sponsored a House resolution expressing support for the Southern Gas Corridor that has 58 co-sponsors.

In its most recent annual human rights report, the U.S. State Department said restrictions on freedoms of expression increased in Azerbaijan last year, and that journalists and rights activists faced "intimidation, arrest, and use of force” from authorities.

The report, released in February, also cited "arbitrary arrests” and "politically motivated imprisonment” as a significant problem in Azerbaijan last year, and it criticized the presidential campaign that saw Azerbaijani leader Aliyev reelected. The campaign season was marred by "a repressive political environment” and the "lack of a level playing field among candidates,” the report said.

Elmar Abdullayev, a spokesman for Azerbaijan's Foreign Ministry, dismissed the report as an impartial and inaccurate assessment.

"There was no cooperation with the Azerbaijani state bodies to ensure the objectivity of the document based on subjective judgments voiced by suspicious sources, reflecting unfounded accusations,” Abdullayev told the Trend news agency in March.

A Congressional staffer who works on human rights issues said lawmakers are coordinating with U.S. diplomats to show that the United States can "walk and chew gum at the same time” when it comes to handling both energy and human rights in its relations with Azerbaijan.

"We’re working with the State Department to make sure that those messages are getting across, along with the messages that, you know: ‘We need your gas supplies,’” the staffer told RFE/RL.

Richard Kauzlarich, former U.S. ambassador to Azerbaijan under the Clinton administration, said that Azerbaijan would be more successful in painting itself as an attractive partner for Western countries by improving its human rights record rather than cracking down at home.
"If the Azerbaijanis were thinking about ways to increase the attractiveness of Azerbaijan as a strategic partner, they would, you know, they would move in the opposite direction: releasing political prisoners, removing the restrictions on access to media and generally improving the human rights situation,” Kauzlarich told RFE/RL.

Another former U.S. ambassador to Azerbaijan, Matthew Bryza, told RFE/RL that he doubts Washington will give Baku a free pass on human rights to focus on energy cooperation.

"I think U.S. officials view these issues as inseparable. And I know there are plenty of more cynical views out there, and people think, well the U.S. never paid enough attention to democracy and human rights in Azerbaijan, and is going to pay even less now. But I just honestly don’t share those views,” Bryza said.

Morningstar, the current U.S. ambassador in Baku, conceded at this week’s event in Washington that his criticism of Azerbaijan’s rights record would likely spark controversy.

"I know some of you may not agree with what I say,” he said, "but I can only tell you what I believe and what our policy is and how much, as a true friend of Azerbaijan, we want to continue to strengthen that relationship.”