European Commissioner: Azerbaijan will go down in history as country which carries out unprecedented campaign of repressions 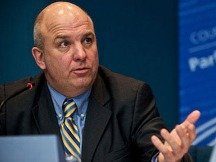 "During the two and a half years as European Commissioner for Human Rights, the most challenging mission for me was the visit to Azerbaijan in October 2014. In late October I was in Azerbaijan, which recently completed its mission as Chairman of the Committee of Ministers at EU. Azerbaijan will go down in history as the country which has carried out an unprecedented campaign of repressions against human rights defenders during his presidency," Nils Muiznieks CoE Commissioner for Human Rights wrote on his Facebook page.
"Many of my friend-defenders are in prison in Azerbaijan. It was hard to visit Leyla Yunus in jail during the pretrial detention. She cried throughout our half-hour meeting," he writes.
Mujzhnieks also notes that Leyla Yunus, director of the Institute for Peace and Democracy is a prominent human rights activist and one of the three nominees of this year for the prestigious European Parliament's Sakharov award.
He also noted that Yunus suffers from diabetes and hepatitis, has no chance to see her husband – Arif Yunus, who, despite heart strike, is in pre-trial detention. They were both charged with high treason. Mujzhnieks also noted that Leyla Yunus has compiled a list of political prisoners in the country. According to him, the day of his departure from Azerbaijan Yunus’ term of arrest was extended for 4 more months.
"Another serious meeting was the meeting with lawyer Intigam Aliyev, the head of the "Legal Education Society", who is also in pre-trial detention. The term of his arrest was extended for three months on the day of my departure. At the time of declaration of the decision of the court, Intigam lost his consciousness," the Commissioner writes.
Nils Muiznieks also noted that he had met with Anar Mamedli, the head of the Election Monitoring and Democracy Studies Center, who was awarded with the Human Rights Prize of Vaclav Havel in 2014. Mamedli was sentenced to 5.5 years in prison. He also met with Rasul Jafarov, who headed the NGO "Human Rights Club". Mujzhnieks notes that Jafarov’s term of pretrial detention was extended for three months.
"While most of my partners are in prison, others were forced to suspend the human rights activities, to leave the country or to hide," writes Mujzhnieks.
He also noted that he met Emin Huseynov, director of the Institute of Reporters Freedom and Safety. "I visited him. Despite his young age, he had high blood pressure and an old spinal injury – which is a result of being beaten by police during a rally," writes Mujzhnieks.
According to him, such actions hinder the Council of Europe to have normal co-operation with Azerbaijan. Mujzhnieks also noted that this repression must be stopped immediately.