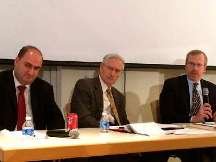 Top U.S. analysts and activists who closely follow Azerbaijani policy, on Friday, called on the Obama administration to enact sanctions against Ilham Aliyev’s government amid outrageous human rights violations in the country.

Unfortunately, the Azeri government’s behavior and statements "indicate that Heydar Aliyev period of cooperation between US and Azerbaijan is over,” said Richard Kauzlarich, a veteran diplomat (ret.) who mid 1990-s served in Baku as a US Ambassador.

Kauzlarcih spoke at an event named "Time to get tough with Baku” organized by AZAD, an Alexandria-based nonpartisan organization that advocates for democracy in Azerbaijan.

The event marked on a date when Azerbaijanis in 2003 buried Haydar Aliyev, a former KGB general who for 30 years ruled the country with an iron fist, first as its Communist leader, then as a president after independence, died at a clinic in the U.S.

Despite years of differences, Azerbaijan under Haydar Aliyev years was "willing to work” with the U.S. Kauzlarich reminded.

"This [cooperation] enabled Azerbaijan’s prosperity and allowed it to continue with sovereignty as an independent state; it provided both political and commercial framework for energy; it led to cooperation between two countries in Afghanistan, and even despite the limits places on U.S. assistance programs, we were able to work with NGOs to advance democracy, freedom of expression and human rights," he said.

Nothing has changed to good in U.S.-Azerbaijani relations since Aliyev’s passing the power to his son, Ilham Aliyev, according to the analyst.

On the contrary, after years of embracing initial NGO activities in Azerbaijan, now the U.S. civil society groups are seen as a threat in Baku,” Kauzlarich emphasized.

He also sited the latest manifesto of Ramiz Mehdiyev, Azeri president’s chief advisor, who suggests that the U.S. is plotting to overthrow Aliyev.

For Kauzlarich, "documents like this” which clearly accuse US in creating fifth columns in Azerbaijan and trying to accomplish regime change, identifies NGOs who works with the U.S. as "Azerbaijani traitors” are now "responsible” for the situation between the two countries.

As for Washington’s response, Ambassador suggested a travel warning to US citizens visiting Azerbaijan. People there may be watched, filmed, etc. "Really bad things can happen to you,” he said.

He also suggested to the west to "be clear” with its messages to Baku. EU and US should coordinate their efforts, he said.

If diplomatic pressuring to Aliyev government does not work, Kauzlarich said, "it is time to consider that is sanctions that show to the government that there are consequences that go with the continued violation of human rights.”

In his speech, David Kramer, former President of Freedom House, currently senior director for human rights and democracy at The McCain Institute, said, sanctions wouldn’t be imposed if governments treated its own people with respect.

Azerbaijan, for Kramer, has been violating not only western principals, but also universal principals.”

Kramer added, the situation in Azerbaijan has recently got significantly worse. Currently there are over 100 political prisoners in the country, "double what is in Russia and Belarus, where we have sanctions.” Pressure for release of prisoners is absolutely vital, he said.

Kramer also suggested an approach of urging all European political leaders to stay away from the 2015 European Games in Baku, as most did at the Sochi games earlier this year in February.

"Denying Aliyev the opportunity to stand on center stage with political leaders would be a blow to his image,” he said.

In their speeches AZAD’s Elmar Chakhtakhtinski and Gorkhmaz Asgarov made it clear that they believe time has already arrived for the sanctions.